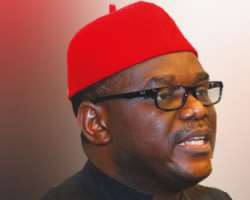 As part of preventive measures against the Ebola Virus Disease, EVD, the Federal Government has directed relevant authorities to henceforth stop receiving corpses from the West African countries into the country.

The government specifically banned the bringing of corpses from the West African countries where the spread of EVD had been established. It however said that there was no fresh case of Ebola virus disease in the country.

The implication is that any Nigerian who dies in any of the affected West African country would be buried  there as the cost of keeping such corpses in mortuaries until the EVD palaver settled could be very enormous. It also means less expenses for such bereaved families who may have to bury their loved ones in the said countries of West Africa.

On the heels of the Federal Government's action was  Anambra State government which yesterday, directed the screening of corpses entering into the state from  any part of the country as part of it's precautionary measures against the dreaded disease.

However,  there were mixed reactions to the advice by health officials on Nigerians to avoid the consumption of bush meat so as not to contract the dreaded Ebola Virus Disease, EVD, at  Amasiri in Afikpo Local Government Area of  Ebonyi State, where the Health Minister, Onyebuchi Chukwu, hails from.

70 contacts under monitoring
At least 70 persons have been identified to have had contact with the late Liberian, Mr. Patrick Sawyer who died of EVD, in Lagos, just as the Lagos State government said that two earlier identified persons who developed fever after having contact with Sawyer had tested negative of the killer disease.

At separate news conferences yesterday, at Ikeja on the update of Ebola case in the state, the Director, Nigeria Centre for Disease Control, NCDC, Professor Abdulsalim Nasidi, the Lagos State  Commis-sioner for Health, Dr Jide Idris and Special Adviser to Governor Babtunde Fashola, Dr Yewande Adeshina, at Alausa,  said the Rapid Response Team, RRT, on the disease was currently tracking all contacts of persons exposed to the passenger with EVD.

Nasidi, who commended the Lagos State government for its prompt response and pro-active measures so far, said that 75 percent of early detected patients of EVD survived.

Nasidi explained: 'All the guidelines we are using were specified by the World Health Organisation, WHO. On the manifest concerning Sawyer, the manifest we are waiting for included the manifest on the first flight between Monrovia, Ghana and Lome… We have got some of the information but there are some little gaps we are trying to fill. We are getting full corporation from the airline operator.''

'The FG has issued a directive that we will henceforth not receive anybody or corpse from the West African coast especially from Liberia and others that were on red alert for Ebola virus. Mechanisms are in place to checkmate that. For instance, a plane was to come into the country with a corpse but the port health officials rejected it. Our problem is the land border.

'We are working in collaboration, the country will be notified through the diplomatic channels that they should not allow any transportation of any dead corpse into the country, so it is both side

'But in order to have effective monitoring, we held a meeting today (yesterday) and how it will be done was stated. We shall be giving update on this very soon.

'All the handlers of the corpses brought into the country from Liberia via Air Gambia will be registered and tracked and those who accompanied the corpse to Anambra and the mortuary handlers are under quarantine in Anambra State.

'Our team in Anambra State will tomorrow, (Today) give us the statistics of those who came in contact with the corpse.

Two contact people with fever
''The two people tested negative but that does not mean that we will stop. We will continue to place them under observation until we are certified that they are free. They were part of the 70 established contacts. First, it was 59, it increased to 69 and yesterday (Thursday), we had another and this increased the number to 70.

Early detection percentage
On early intervention, three out of four cases survive but if they come late, one out of four survives.

Lagos Health Commissioner
On his own, the Lagos State Health Commissioner, Jide Idris, said the state government embarked on contact tracing following the report to ensure that all contacts to an Ebola patient who developed fever received care immediately and were separated from others to stop spread of the disease, stressing that it is the best way to stop the spread of the disease because contacts are not infective until symptoms start.

Meantime, Governor Babatunde Fashola of Lagos State, has urged Federal Government to urgently shut some of the borders as part of preventive measures against outbreak of EVD.

Fashola, who earlier spoke with Government House Correspondents on the EVD in the state after returning from Lesser Hajj in Saudi Arabia, harped on vigilance by governments at all levels and members of the public.

According to him, 'Few West African countries have been at the epic center of the virus. I believe some of the countries are Sierra Leone, Liberia and Guinea. There is a risk to the entire sub-region. I like to commend all the health workers in the state for the very professional manner they have responded while I was out of the country.

'One must also commend the management of First Consultant Health Centre for choosing life ahead of money. That is how it should be. I must use this opportunity to appeal to all health institutions to report  suspects any such case.

'I believe what people must begin to do is to imbibe stronger sanitation and preventive measures, especially hand-washing periodically with soap and water. This has been part of our health strategy. This was why we created the department of public health in 2011. This is the emerging global health challenge.

'This is no longer a local, but an international problem because it is easily transmittable across the borders and boundaries. The Federal Government team has been working with the state team, I think what the Federal Government needed to do at this time is to consider the imperative of closing some of our borders.

'It is difficult to stop this epidemic, we must now choose the treaty obligations that we hold under the ECOWAS treaty and perhaps short term benefits in terms of economic cost to human life. We must make that choice and consider it very seriously. It is a national security issue.

'I think we should give it that attention. I think men and women who man our border posts-sea, air and land-especially the customs, now know that they are our first line of defence. What happens going forward depends on how professionally they act. It is prevention rather than calling the health professionals to quarantine people.

'That is really the strongest defence now against migration of the virus. We will continue to put out information about what the health risks are and the symptoms. I have instructed the ministry to enlighten the public on what to do in order not to contact the virus.

'Dead bodies emit fluid. This showed that the cremation policy of the state is the best solution to deal with the issue. This is a health security and people must embrace contemporary hygiene standards. All the residents who had contacts with the dead Liberian have been tested and the result proved negative.

'But there is still risk because we had a dead body was brought into the country from Liberia. This means there is still need for vigilance at our border post. The officials at these places should act professionally and report every incident they suspect.'

Anambra orders screening of corpses into the state

Also, following the scare of Ebola disease in Anambra State as a result of a corpse brought into the state from Liberia last week, the state government yesterday directed immediate screening of all  corpses received in the state.

The state governor, Chief Willie Obiano made this known in Awka yesterday.

Obiano, who addressed reporters at the Women Development Center, Awka, said he has already instructed the police to mount stop -and -search at all entry points to the state, adding that those carrying such corpses must show the certificate of death of the corpse before they could be allowed into Anambra.

He however debunked the rumour of Ebola disease in the state, saying that all that the government was doing was to take precautions since that corpse was brought from Liberia where the disease had claimed many lives.

Fashola wants Nigeria borders closed
Governor Babatunde Fashola of Lagos State has urged the Federal Government to shut down its borders with affected West African countries to prevent outbreak of Ebola virus in the country.

Fashola on Friday at Lagos House, Ikeja, said Ebola was no longer a local problem, but an international one that required urgent measures in place to prevent its spread.

He said, 'This is because it is easily transmittable across the borders and boundaries

'It is difficult to stop this epidemic and we must now choose the treaty obligations that we hold under the ECOWAS treaty and perhaps short term benefits in terms of economic cost to human life. We must make that choice and consider it very seriously. It is a national security issue and I think that we should give it that attention.

'I think that men and women who man our border posts - sea, air and land -especially the customs, now know that they are our first line of defence.

'It is prevention, rather than calling the health professionals to quarantine people, that is really the strongest defence against the virus.'

The governor added that all residents who had contacts with the dead Liberian had been tested and that the result proved negative.

'But there is still risk because we heard that a dead body was brought into the country from Liberia. This means that there is still need for vigilance at our border post. The officials at these places should act professionally and report every incident they suspect,' Fashola added. Additional report from vanguard