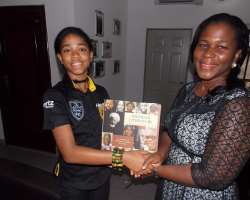 After 6 and half weeks of traveling more than 28,000 miles through 6 countries [USA, Brazil, Ethiopia, Nigeria, Mauritius and South Africa] on 3 continents, Zuriel Oduwole's #FollowTheBallForEducation project came to a befitting close on Thursday, July 31 in Port Harcourt - Rivers State.

She arrived in Nigeria on Saturday for the last leg, starting first at the Lagos House in Marina, where she was received by the First Lady - Mrs. Abimbola Fashola, who commended her incredible and stellar efforts, and signed the ball on behalf of the people of Lagos.

Zuriel headed to Port Harcourt, the venue city of the 2014 World Book Capital, where she met the project director - Mrs. Koko Kalango. She was formally made a Goodwill Ambassador for the Rainbow Book Club, and would use her initiative and developing global influence to encourage reading across all ages.

Zuriel leaves Lagos in a few days for Washington DC, where the US-Africa Summit is holding between President Barack Obama and Africa's 54 leaders. Zuriel has already met with and interviewed 1 in 6 of Africa's Presidents. She is an emerging and influential African as well as the face of the Heritage Bank Brand.