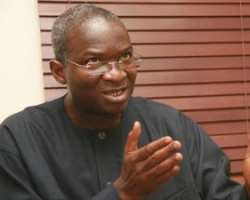 Governor Babatunde Fashola of Lagos State has urged the Federal Government to shut down its borders with affected West African countries to prevent outbreak of Ebola virus in the country.


Fashola on Friday at Lagos House, Ikeja, said Ebola was no longer a local problem, but an international one that required urgent measures in place to prevent its spread.


He said, 'This is because it is easily transmittable across the borders and boundaries.


'It is difficult to stop this epidemic and we must now choose the treaty obligations that we hold under the ECOWAS treaty and perhaps short term benefits in terms of economic cost to human life. We must make that choice and consider it very seriously. It is a national security issue and I think that we should give it that attention.


'I think that men and women who man our border posts - sea, air and land -especially the customs, now know that they are our first line of defence.


'It is prevention, rather than calling the health professionals to quarantine people, that is really the strongest defence against the virus.'


Fashola said the cremation of the remains of the Ebola victim in Lagos was the best option as dead bodies emitted fluid.


The governor added that all residents who had contacts with the dead Liberian had been tested and that the result proved negative.


'But there is still risk because we heard that a dead body was brought into the country from Liberia. This means that there is still need for vigilance at our border post. The officials at these places should act professionally and report every incident they suspect,' Fashola added. NAN