TB Joshua Is An Amazing Man Of God - Benny Hinn 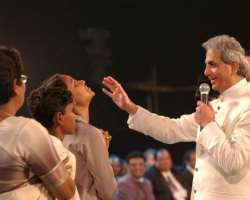 Despite the staunch stand of Nigerian Pentecostal leaders against the controversial Pastor T.B. Joshua, charismatic American leader Benny Hinn has openly attested to his authenticity.

Speaking in an interview with Joshua's Christian television station, Emmanuel TV, Pastor Hinn described the cleric as an 'amazing man of God', further stating his desire to meet and fellowship with him. “We men of God need to come together”, said Hinn during the interview, encouraging Joshua to “keep up the good work and preach the Gospel like you do so powerfully and teach God's precious Word”.

Both men, world-acclaimed for their extensive healing ministries, have generated controversy by their unique methods of faith-healing and televangelism, currying persecution and criticism in its stead. But according to Hinn, “Persecution is a part of our life,” an assurance of God's approval of your actions. “If I'm not persecuted, I think something is wrong. Because the devil does not fight those who are for him, he only fights those who are against him. If we oppose him, then we'll be attacked.”

Pastor Joshua, reputed to be the most vilified Pastor in Africa, corroborates. “The persecution we suffer in the hands of our detractors causes us to be known,” he says, citing persecution as a tonic to one's anointing and the reason for his drawing closer to God.

Speaking on his own times of hardship, Hinn stated that trials serve as a source of strength to the one who runs to God and not from Him during them. “If you run away from Jesus, you're in trouble. It's foolish. If you run to Jesus, you become stronger because He is our place of safety.” Hinn opined that the Christian journey is that of warfare, the key to overcoming being to 'seek Jesus', fully reliant on His strength and not your own merit.

On a practical note, Pastor Hinn enjoined believers to read their Bibles daily, observing this to be the 'greatest secret' to effective Christian living. “I would tell every Christian - make the Bible a part of your daily life. Don't just put the Bible on a shelf. Let the Bible live in you,” he said.

Showering encomiums on Emmanuel TV, of whom Hinn said he is regular viewer, he exhorted the saints to 'support this great outreach to the world'. Emphasizing the importance and influence of Christian television as a powerful means of preaching The Gospel, Hinn called on the faithful to give 'from the heart' to such networks. “The Gospel is the only answer to this world's troubles. There's no political solution. There's no financial solution. It's a spiritual solution and Jesus is the answer to the world's needs - and His Gospel must be preached.”

Hinn concluded by saying he would 'most certainly accept an invitation from Pastor Joshua to come to Nigeria'– the first time he would return to 'The Giant of Africa' since the controversial crusade in 2006 which was marred by accusations of dishonesty on the part of his Nigerian hosts. Hinn's statements will come as a shock to many Nigerian Pentecostal Leaders, who have sworn not to associate with Joshua. It comes on the heels of widespread commendation for Pastor Joshua on his role in bringing up Sani Emmanuel, the MVP and Silver Shoe winner of the recently concluded FIFA U-17 World Cup.

T.B. Joshua is the pastor of the famous Synagogue, Church Of All Nations in Lagos, Nigeria. With a growing passionate following due largely to the widespread popularity of Emmanuel TV, alongside the touching charitable works, healing testimonies and prophetic revelations that characterize his weekly services, Pastor Joshua seems set to prove his critics, who had already written him off, wrong.