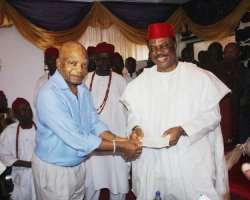 Governor Willie Obiano's efforts to garner the support of Ndi Anambra for his programmes have started to yield desired results as multi-billionaire businessman and Chairman/CEO of Atlas Oranto Petroleum International Limited, Prince Engineer Arthur Eze has doled out the sum of $1m to support the on-going crackdown on criminals in the state and pledged the sum of one billion naira to support the governor's agricultural programme.

Making the donation in his palatial home of Ukpo in Dunukofia Kingdom of Anambra State when the governor, accompanied by his deputy, Dr. NkemOkeke and the National Chairman of APGA, Sir Victor Umeh, paid him a courtesy call at the weekend, Prince Eze who is a famous philanthropist and a chieftain of the People's Democratic Party, explained that the gesture was intended to encourage Governor Obiano's efforts to make Anambra State a habitable and business-friendly environment for all.

According to him, Governor Obiano had shown great wisdom in making security the priority of his administration as the fear of violent criminals in the state had denied it the benefits of rapid industrial growth arising from investment inflows that would have come from its entrepreneurial indigenes as well as foreign investors.

Prince Eze further observed that Obiano's relentless war against criminals in the state has restored calm and stability and liberated the people from years of captivity in the hands of kidnappers and armed robbers.

The multi-billionaire remarked that since Obiano's campaign against criminals began to yield fruits, Anambra indigenes living outside the state had started to visit home freely without any fear of a threat to their lives while the tempo of economic activities in the state had also increased.

In his response, Governor Obiano thanked the philanthropist for his role as a stabilizing force in Anambra State and a formidable pillar in Igbo land.

He assured the people of Ukpo that his administration would accommodate them in all its programmes, promising to build the longest road linking up the various parts of the town to the surrounding towns. The governor also assured them of appointments into his government in line with his administration effort to build a broad-based, all inclusive government.

According to him, the push-back against criminals and criminality in Anambra State would be sustained all through the life of his administration as there was no turning back from the decision he had made to rid the state of crime.

Governor Obiano also assured the people that his plan to create jobs for the teeming population of youths in the state and reduce the incidence of crime had started to yield fruits as more investors had indicated interest in investing in his programmes in agriculture.

He advised farmers in the state to organize themselves into co-operatives as it was imperative to attracting the support and nurture of the government.

In his own remarks, the National Chairman of the All Progressive Grand Alliance, Sir Victor Umeh noted that the donations from Prince Eze were symbolic of the new Anambra that had started to unfold since the inception of the Obiano regime.

The party chieftain observed that Prince Eze's gesture and overwhelming support to the governor could not have come at a better time as the party was still celebrating the affirmation of Chief Obiano's victory by the Court of Appeal sitting in Enugu.

According to him, by throwing his famous financial muscles behind Governor Obiano's government, Prince Eze who is also a known financial pillar of the PDP had passed a subliminal message to other defiant parties in the state to sheath their swords and join hands with the APGA-led government to build a better Anambra State.

He also thanked Prince Ezeh for endorsing his ambition to run for the Senatorial Seat of Anambra Central in the coming elections and assured the people that he would offer them his very best if given the chance to represent them.