Jonathan, Amosun commiserate with el-Rufai on death of son 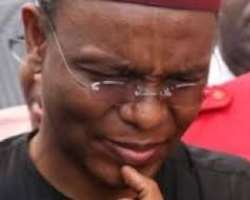 Jonathan, Amosun commiserate with el-Rufai on death of son
Listen to article

President Goodluck Jonathan on Tuesday set politics apart to commiserate with ith a former Minister of the Federal Capital Territory, Mallam Nasir El-Rufai, on the death of his son, Hamza. El-Rufai, is one of the most avid known critic of the Jonathan administration, who has attacked every effort of the administration in the most dismissive terms.

The former, who is now a chieftain of opposition All Progressives Congress (APC) lost his son  son to auto crash in Abuja in the early morning of Tuesday.

While announcing the death of his son via the Facebook page, el-Rufai asked Nigerians to help pray for the repose of the soul of Hamza.

“From Allah we came and to him we shall return. Please join our family in praying for the repose of the soul of my son, Hamza El-Rufai, who died this morning in a motor accident in Abuja,” he announced on his Facebook page.

President in his sympathy message expressed the belief that the outpouring of support at this moment by his friends and associates would comfort El-Rufai.

Jonathan, who conveyed his message through a statement by his Special Assistant (Media & Publicity), Dr. Reuben Abati, prayed for the repose of the deceased's soul.

The statement read, “President Goodluck Ebele Jonathan has received with a deep sense of grief and shock, news of the sudden and untimely death of Hamza El-Rufai, son of the former Minister of the Federal Capital Territory, Mallam Nasir El-Rufai.

“On behalf of himself, his family and the Federal Government, President Jonathan extends his heartfelt commiserations to Mallam el-Rufai and all members of the El-Rufai family.

“The President says although no amount of words can fill the deep gap created by the loss of Hamza, he hopes that the outpouring of support at this moment by friends and associates will comfort Mallam El-Rufai.

“President Jonathan prays for the peaceful repose of the soul of the departed and also for God's blessing, comfort and protection for Mallam El-Rufai and the rest of his family.”

The governor, nn a press release signed by his Senior Special Assistant on Media, Mrs Olufunmilayo Wakama, conveyed his deep shock and heartfelt condolences to the family of the former Minister of the Federal Capital Territory (FCT), Mallam Nasir El-Rufai on the death of his son, Hamzat El-Rufai.

Senator Amosun described the demise of young Hamzat, a graduate of University of Virginia and United World College of the Atlantic, who died in an auto crash in Abuja, as “most regrettable and unfortunate.

“It is so sad that his life was cut short in a fatal accident at a time he would have been contributing his quota to the development of his father land after acquiring a good education”, he added.

The governor prayed Allah to grant the soul of the departed Aljanah Fridaus and the family he left behind the fortitude to bear the irreparable loss.

Hamza is the third of the former minister's children lost to untimely death in the past three years.