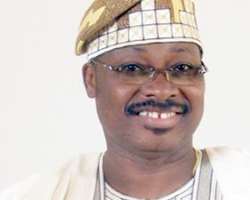 2015: Ladoja Says No Going Back
Listen to article

Ahead of the 2015 governorship election in Oyo State, veteran politicians in the state used the Eid-El-Fitr celebration to express readiness to contest inthe February gubernatorial election.

While the incumbent governor, Senator Abiola Ajimobi, vowed to break the second term jinx as he addressed supporters and well wishers who converged on Agodi Government House to celebrate Sallah with him, the national leader of the Accord Party and former governor of the state, Senator Rashidi Ladoja, also declared interest to contest the 2015 election.

No governor had ruled Oyo State twice in the state's 38 years of existence. Ajimobi and Ladoja are not the only ones gearing up for the exalted seat as another former governor in the state and member of the Peoples Democratic Party (PDP), Chief Adebayo Alao-Akala, has equally signified intention to run for governor in 2015.

Notwithstanding Ajimobi's move to remain in office beyond May 29, 2011, Ladoja also dissociated his party (Accord) from the purported plan to impeach Ajimobi by the state House of Assembly.

Ladoja also the hinted that he would pick expression of interest form of his party with a view to contesting 2015 gubernatorial elections in the state.

“I can only endorse myself. I intend to pick the expression of interest form to contest 2015 governorship elections, but this will be based on if my party wishes that I should contest the election,” Ladoja said.

Ladoja, who was fielding questions from journalists shortly after observing the Eid-prayer at the University of Ibadan Central Mosque, said the party has instructed members in the house to distance themselves from any attempt at plunging the state into security crisis and chaos.

According to him, there was no reason whatsoever for a house to wake up suddenly and accuse the governor of any misconduct towards the end of his administration.

The former governor said he has suffered impeachment and got justice from the Supreme Court of Nigeria and will never support any impeachment plan.

“I cannot understand the basis of anybody in the house suddenly waking up to nurse any impeachment ambition against Governor Ajimobi. In any case, Accord is not a party to it. I cannot understand why they will wake up and say there is/are misconducts.

“Let them publish it for people to see but as far as I am concerned and our party is not part of any purported plan to impeach governor Abiola Ajimobi. We have told Accord members in the house that we are not party to it and that they must distance themselves from it.

But Ajimobi appears not deterred by the readiness of his two former predecessors as he charged politicians in the state to embrace politics of intellectualism, development and poverty alleviation rather than politics of brigandage, character assassination and name-calling.

The governor, who noted that the state had risen beyond the hitherto pedestrian level when politics of violence, brigandage, character assassination and name calling used to hold sway.

“All we are doing in Oyo State now is politics of intellectualism, development and poverty alleviation. All of us in the position of authority and leadership should be ready to develop Oyo State and help it to grow,” he said.

Ajimobi also called on the people of the state to continue to live in harmony and support the present administration in its transformation policies.

He stressed the need for the people to continue to live in unity and peace, noting that without peace, it would be difficult to achieve meaningful development in the state.

The governor called on the people of the state to accommodate one another, irrespective of religious, political or ethnic differences.

While canvassing Godliness among the people, he pointed out that it was the duty of the Godly and the virtuous people in the society to always preach to the bad ones so that the problems of insurgency, armed robbery and political violence in the country would be a thing of the past.

Earlier at the Eid ground in Agodi area of the city, the Chief Imam of Ibadanland, Sheik Suara Busari Haruna admonished the Muslim community to continue to pray for the country to overcome its present security challenges and particularly, as the 2015 general elections gathered momentum.

He enjoined Muslims to see the month of Ramadan as the period of necessary training and orientation for them on how to pattern their lives for the remaining 11 months of the year.