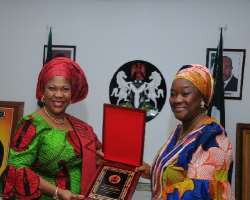 Wife of the Akwa Ibom State governor Ekaette Unoma Akpabio has said that most of Nigeria's social problems are traceable to the loss of moral values at the family level. The governor's wife was speaking to executive members of the Nigerian Army Officers Wives Association (NAOWA) when they paid a courtesy visit to her earlier today at Government House, Uyo.

'Some of the challenges we are facing as a country today is because we have lost our family values' she said. 'We have neglected our children for too long, that is why they sometimes rebel. I believe that God is not happy with us as mothers because we indulge our children too much. Every problem should not be on the head of the president. We have to do our own part as mothers, wives and sisters at home. We must not forget that when the family is not stable, the society cannot be stable.'

She commended NAOWA for their interest in the welfare of their members who had lost their husbands to wars and the ongoing insurgency in the country and urged them to always protect the welfare of widows in their midst. She however identified with their noble charity service to widows and vulnerable children saying she is always passionate about issues concerning the vulnerable groups in the nation because of her experience with such.

She reminded members of the delegation that charity begins at home and urged each one of them to look within their families and communities for people in need whom they could assist at an individual level. Mrs. Akpabio also enjoined the group to always pray for our leaders, especially the President and the security forces who are sacrificing a lot to protect our lives and property. Mrs. Akpabio donated the sum of two million naira and 100 wrappers to the association in support of their efforts to rehabilitate widows of fallen heroes.

Speaking earlier, the wife of the Chief of Army Staff and National President of the Nigerian Army Officers Wives Association (NAOWA) Mrs. Felly Minimah, commended the wife of the Akwa Ibom State governor, Mrs. Ekaette Unoma Akpabio, on her exemplary commitment to widows and other vulnerable persons in the state.

Minimah said NAOWA was on a tour of military formations around the country to visit and empower widows and children of fallen heroes, adding that they had found it fit to extend a hand of partnership to the governor's wife because of her proven commitment to empowering widows and vulnerable children, expressing the group's hope that she would lend a helping hand to victims of insurgency in the country. She also commended the state governor for his unflinching support to the Nigerian army and thanked Mrs. Akpabio for her generous support to the Association.