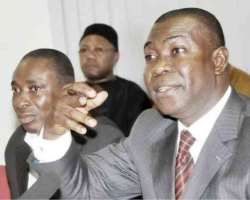 In a dramatic move, the Senate yesterday voted to delete an aspect of the Constitution which prohibits people indicted for various offences from contesting elections.

Ike Ekweremadu, the deputy senate president and the leader of the constitution review committee which made the recommendation argued that if left in the constitution, it can be used by government officials to witch-hunt political opponents.

Mr. Ekweremadu, a lawyer, also argued that other provisions in section 137 of the constitution can adequately cover the intentions of the deleted section. The section, 137 (1), prohibits people who have been indicted for embezzlement or fraud by state or federal panels of enquiry or tribunals from running for presidential office.

During the voting, 90 senators supported that it be deleted while only five senators voted for the retention of the section.

However, typographical errors and omissions prevented the Senate from formally passing the draft after the final reading on Wednesday.

Government of thieves
Various reactions across the country have trailed the vote for the removal of this section.

“This confirms what we have always been saying, that this is a government of thieves and therefore the anti-corruption campaign is dead,” lamented Balarabe Musa, the chairman of the Conference of Nigerian Political Parties. Mr. Musa, in a phone interview from Kaduna added that, “we are now in trouble in Nigeria because we are apparently now being ruled by thieves in Nigeria.” He likened the 'Senate's abysmal act' to the failure of the National Assembly in passing the forfeiture bill sent to them by the Economic and Financial Crimes Commission to confiscate properties of treasury looters.

This sentiment was echoed by Rotimi Akeredolu, the Nigerian Bar Association president who described the Senators' action in a terse text message, as a “futile exercise” adding that, “the Senate cannot on its own alone repeal any provision of Constitution.”

A timely amendment
However, Sam Amadi, a lawyer, and director, Ken Nnamani Centre for Leadership and Development said the repeal of the act was not an anomaly. Mr Amadi said that in line with other constitutions across the world, the Electoral Act and not the Constitution should specify the eligibility of candidates to contest for election. “I think the clause should be removed completely from the constitution,” Mr. Amadi said. “Our Constitution is not working because we have so many unnecessary things in it. Given our country where corrupt persons aspire to the highest offices in the land, the Electoral Act should be what is to be amended and the eligibility clause should be streamlined into criminal conviction and not just indictments.” He also warned about what he called, “retaliatory indictments,” saying, “we've seen in the past where governors set up panels and enquiries to get back at foes thereby discrediting the person(s) candidature for elections through such indictments and thereby creating confusion and legal challenges for the electoral process.”

Another legal practitioner who welcomed the Senate's action is Chris Uche, who said, “the amendment of Section 137 (1)of the Constitution is timely and welcome to remove disqualification to contest election based on indictment by panel of inquiry given the abuse of that clause by governments.”

According to Mr Uche, “the need has arisen because of the abuse of this provision by the federal and state governments to block political opponents from contesting elections.”

Mr Uche based his argument on what happened to former Vice-President Abubakar Atiku and the former administration in Abia State which also issued a white paper indicting several politicians. “Happily, the Supreme court had in the Atiku case (AC vs INEC) in 2007, neutralised that provision which has now been repealed by defining indictment to mean trial by a court of law. Therefore, what the Senate has done is a legislative endorsement of a judicial reformation of the law by a proactive Supreme court.”

Yinka Odumakin, the spokesperson of the Save Nigeria Group who recalled a statement credited to a Senator, Nuhu Aliyu, that the “National Assembly is full of criminals,” warned that politicians should not think of using this avenue to pave the way for their return in the forthcoming elections.

He however recalled that the supreme court already ruled that an indictment by an admnistrative panel is not a judicial conviction. “We saw the way this section was abused under Olusegun Obasanjo. Even Orji Kalu set up a panel to do a counter-indictment of Mr. Obasanjo and Iyabo.”

The cross carpeting law
Senate also deleted the section prohibiting lawmakers from cross carpeting. Section 68 (g) prohibits federal legislators from dumping the political party on whose platform they were elected unless there is a division in that party. It was deleted by a lean margin of 75 votes, two votes above the required minimum of 73.

Insertions were also made in the constitution, including two clauses in section 228 of the 1999 constitution, to enable the National Assembly make laws that will regulate internal democracies in political parties.

The new section, which got at least 89 votes on Wednesday now reads:

“The National assembly may by law provide for guidelines and rules to ensure internal democracy within political parties, including making laws for the conduct of party primaries, party primaries and party conventions.”

“In the calculation of the four year term, where a re-election has taken place and the person earlier sworn in wins, the time spent in the office before the date the election was annulled, shall be taken into account,” the section reads.

The other recommendations which passed include clauses which make the Independent National Electoral Commission and its chairman above the authority of the president or any other body, and the recommendations to make the commission, the National Assembly and the Judiciary financially independent of the executive.

The independent candidacy clause and the recommendation to conduct election not earlier than 150 days before swearing in and not later than 90 days, were also passed overwhelmingly.