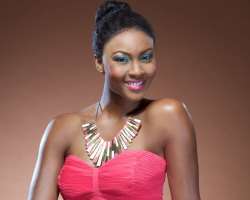 Nollywood actress, Osas Ighodaro, has disclosed that her greatest happiness will be her ability to be able to produce content for Nigerians awarness.

According to the 2010 Miss Black USA winner, Osas, disclosed that she was happy returning back to Nigeria and her major aim is to delve into movie productions which will help make a great impact in the society.

Osas graduated from Pennsylvania State University with a Bachelors of Arts degree in Broadcast Journalism and dual minor degrees in Entrepreneurship and Theatre. She then continued on to earn a Masters of Fine Arts Degree in Acting from the Actor's Studio Drama School at Pace University.

She has appeared in theatre productions that include, The Colored Museum, Revenge of the King, and at present plays the role of Malady in the Audelco Award winning Off-Broadway play Platanos & Collard Greens. Osas has performed in films & TV shows which include, Cadillac Records, 2011 Sundance Film Festival selected: Restless City, The Tested, & Tyler Perry's Meet the Browns. Also, with thousands of entries submitted to the American Black Film Festival/NBC Universal Star Project - Monologue Competition, Osas was one of the Top 3 National finalists.