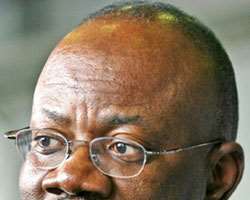 Since the news broke that the founding Managing Director of Zenith Bank Plc, Mr Jim Ovia, has returned to the board of the bank as Chairman, the staff have continued to express delight over the development.

Some of the staff who spoke to THE CITIZEN conveyed their happiness over the return of their 'beloved Jim' to the bank after he stepped down from the helm of affairs over three years ago. “We are happy to see him back in the bank. We missed him and now that he is back to the bank, he will rekindle our loyalty to the brand. Since he left, a lot changed in both management and staff relations. But, Jim is compassionate, understanding and the pillar behind every of our achievements, “said a staff who preferred anonymity. Applaud


According to another staff, 'Ovia's return is going to work like a magic wand in staff performance because many believe that their job is secure with him in the bank in management or board role'.


'When Jim was in the bank, there was nothing like massive sack in the bank. Yes, they used to ask those who had violated the bank's policies to go but no one woke up one day and was asked to go without reasons or notifications. It did not happen under Jim. But now that he is back, we are very happy. Besides, he has the drive and focus to make things better', the staff added.


Staff excitement was made obvious when Ovia visited the bank's head office last Thursday, the first time since the left as MD/CEO. His surprise visit was reassuring to some staff who cheered him as he moved and greeted staff from one floor to the other. He was accompanied on the tour by the managing director and all the bank's executive directors.


It could be recalled that Zenith Bank, sequel to its Board of Directors meeting of April 2, 2014,   notified the Nigerian Stock Exchange (NSE) that Mr Jim Ovia was appointed as a Non-Executive Director and Chairman and Mr Olusola Oladipo as an Executive Director of the Bank respectively. However the appointments took effect from June 16, 2014.


The communication also stated that Sir Steve Omojafor resigned as the Chairman of the Board of the bank effective June 16, 2014.


Ovia's return as the chairman of Zenith Bank is in line with the directive of the Central Bank of Nigeria (CBN) on tenure limit for bank Chief Executive Officers (CEOs) which stipulates that a former bank chief can only hold board positions in any bank or its subsidiaries three years after his initial exit.


In 2010, the CBN had enforced a guideline that stipulated a 10-year limit for banks CEOs. The CBN had at the time explained that the move was taken in order to enhance corporate governance in banks. By this regulation, no managing director is allowed to serve for more than two terms of five years each.


The former Zenith Bank boss is also the founder of Visafone Communications Limited. He is the chairman of the Nigerian Software Development Initiative (NSDI) and also chairman, National Information Technology Advisory Council (NITAC).


He is also involved in the construction of the upscale 150-room Marriot Hotel, which is scheduled for completion this year.

Some financial experts said the return of the former bank chief would be a positive development for the market.