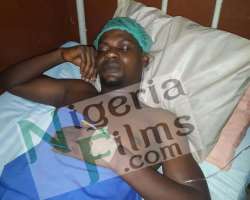 Popular comedian MC Shakara has confirmed to Nollywoodgists.com that he was diagnosed with Appendicitis after complaining of severe abdominal pains some weeks back.

He said the pain became worse on Wednesday morning, in his words, 'I use to take medications for stomach pain, and after a while it will relieve me, but on Wednesday morning it became very serious, so I had to go and do a scan, so they said I had to do an operation immediately'

The comedian said he had a friend who worked in a government hospital but couldn't take him to his hospital because of the doctor's strike, his doctor friend had to take him to a friend's private hospital in Lagos but the comedian didn't disclose the name of the hospital for personal reasons.

He confirmed to Nollywoodgists.comthat he is very much alright now but still in the hospital receiving treatments.