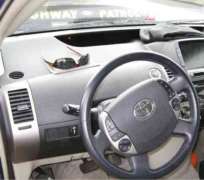 By MICHELINE MAYNARD
and NICK BUNKLEY
March 24, 2010 12:31AM
After reports of sudden unintended acceleration in cars it has already fixed, Toyota has told dealers to provide replacement accelerator pedals to owners unhappy with repairs, a company document showed on Monday.

Under a policy apparently put in place earlier this month, Toyota has told dealers to provide replacement pedals only if customers' cars had already been repaired, and the owners had asked for them.

'Accelerator pedal replacement is based on specific customer request only,' said the memo, which was addressed to dealers, service managers and parts managers. 'Dealers are not to solicit pedal replacement.'

The memo, originally dated March 2010, was reissued on Thursday with the part numbers for the replacement pedals and the procedure dealers should follow.

A spokesman for Toyota, Brian R. Lyons, said the company had agreed with the National Highway Traffic Safety Administration to provide the pedals as part of its recall. The safety agency has received more than 60 complaints of unintended acceleration from owners whose cars had been repaired.

Mr. Lyons said Toyota had already fixed 1.3 million vehicles, and that the number of complaints it had received after the repairs was 'very low.' But he said, 'There have been cases where the pedal feel was not satisfactory to the consumer or the dealer. In those cases, a new pedal has been put in.'

In the last six months, Toyota has announced two major recalls to address complaints that the accelerator pedals on more than eight million cars worldwide could unexpectedly stick.

Safety advocates, analysts and lawyers say the cars' electronic systems may be at fault, a claim Toyota has repeatedly denied.

In January, the company recalled several million vehicles because of the sticking pedals, and briefly stopped producing and selling several models until it could devise a repair.

Toyota told dealers to begin installing a small metal bar in those vehicles that was intended to keep condensation from forming inside the pedal assembly, which the company said could cause the pedal to become stuck.

Poorly fixed
Toyota said the cars from owners who complained about the repair most likely had not been fixed properly, and said the remedy should address the problem when done correctly.

'Although we believe that the majority of customers will be satisfied with the operation and/or the feel of the accelerator pedal after the reinforcement bar has been installed, a few customers may request pedal replacement,' the company said in the memo to dealers.

'Therefore, if a customer is not satisfied with the operation and/or the feel of the accelerator pedal after the reinforcement bar has been installed, please assist us by assuring a replacement pedal is provided at no charge to these customers.'

The memo added, 'A replacement pedal should only be offered to a customer after the reinforcement bar has been installed and the customer has expressed dissatisfaction.'

Mr. Lyons said the appearance between the repaired and replacement pedals is 'almost identical. The change is so subtle.'

In September, Toyota also recalled 3.8 million cars because it said the floor mats could become entangled in the accelerator pedals. It has begun shortening the pedals on the Lexus ES 350 and Toyota Camry and Avalon, and expects to begin repairs for other vehicles starting next month.