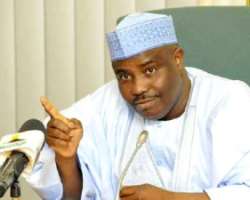 Following the lingering industrial action by Nigeria Medical Association, NMA, Speaker of the House of Representatives, Aminu Tambuwal, yesterday, threatened to summon Minister of Health, Professor Onyebuchi Chukwu, to appear before the House.

Tambuwal issued the threat during plenary, following reports by the Chairman, House Committee on Health, Ndudi Elumelu (PDP, Delta,) about his committee's inability to bring all parties to the table for dialogue.

He said the attempts at getting all parties in the matter to meet and reach a quick resolution had been frustrated by the attitude of government officials.

He said: 'The task given to my Committee entails getting all relevant parties involved in the crisis and interface with them with a view to resolving it within the quickest possible time due to the sensitive nature of the heath sector.

'But since the Minister of Finance and the DG, Budget Office as well as the Head of Service who are central to the issues of Relativity (salary scale) and skipping (career progression/promotion) were not present, we adjourned the hearing to Thursday when we can all seat to resolve the matter and for medical services to be restored in our hospitals.

'Unfortunately, NMA, Salaries and Wages Commission and the Minister of Labour turned up as promised, whereas the Minister of Health and his Finance counterpart failed to appear.' - Vanguard.