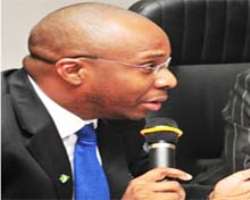 The National Bureau of Statistics (NBS), on Tuesday, released data showing that Nigeria's GDP grew by 6.2 per cent in the first quarter ended March 31, 2014.

A breakdown of the figure for the period showed that 'average daily crude oil production in the opening quarter of 2014 stood at 2.26 million barrels per day, down from the 2.29mbpd recorded in the corresponding quarter of 2013,' the NBS said.

Non-oil real contribution however grew by 8.21 per cent in the opening quarter of 2014, representing an increase of 0.76 per cent points from the 7.44 per cent growth recorded in the corresponding quarter of 2013. Relative to the fourth quarter of 2013, non-oil growth was a marginal 0.57 percentage points lower.

Like the 2013 full year figures, the services sector accounted for the largest share of real GDP in the first quarter 2014, amounting to N8.181 trillion, or 52.99 per cent, followed by industry with a contribution of N4.223 trillion or 27.36 percent; whilst agriculture constituted the smallest sector, representing N3.033 trillion or 19.65 per cent of GDP.

With respect to sectoral growth, the services sector recorded 7.20 per cent, followed by agriculture at 5.53 per cent and industry at 4.84 per cent, the report added.

'First Quarter 2014 growth was recorded at 5.42 per cent an increase from 1.78 per cent recorded during the first quarter of 2013. This was as a result of increased farming activity in combination with high yield seedlings during the dry season,' the report added.

In real terms, telecommunications accounted for N1.276 trillion or 8.27 per cent of total GDP in the first quarter of 2014, marginally lower from the contribution made to the total GDP in Q1 2013 by 0.14 percentage points. Within the period under the review, according to the report, economic activity picked up however, indicating a growth rate of 4.48 per cent, compared to 2.21 per cent in corresponding period of 2013, as a result of increased consumer activity as the number of active lines.