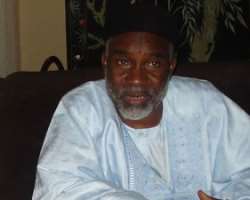 The seven-man panel set up by the former acting Chief Judge of the state, Justice Ambrose Mamedi, to investigate the alleged gross misconduct levelled against Governor, Murtala Nyako and his Deputy, Mr. Bala Ngalari, submitted its report on Monday.

The report, in four volumes, has been forwarded by the panel chairman, Mallam Buba Kaigama to the Speaker of the state House of Assembly, Ahmadu Fintiri.

While receiving the report, the Speaker congratulated members of the panel for being found worthy of handling such a sensitive assignment.

Fintiri said, 'I assure you the committee members and the people of Adamawa State that the Assembly will consider the report meticulously at the plenary in due course before deciding on the next course of action.'

Earlier while presenting copies of the report to the House, Kaigama expressed gratitude to the lawmakers for the opportunity given to him and members of his panel to serve the state.

The panel chairman lamented that the respondents, namely Governor Murtala Nyako and his Deputy, Bala Ngilari, did not show up during the panel's sitting; neither did they send representatives.

The outgone acting Chief Judge of the state had constituted the probe panel to investigate allegations of misconduct against the governor and his deputy based on a request by the House of Assembly.