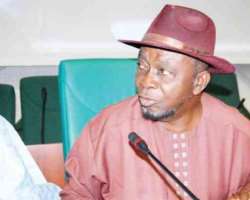 By Ini Ekott
March 24, 2010 02:25AM
The House of Representatives yesterday dealt a major blow to President Umaru Yar'Adua's land restructuring effort, dumping a legislation that proposed the establishment of a National Land Reform Commission.

The commission was sought as a complimentary organ to drive Mr. Yar'Adua's proposed reforms of the 1979 Land Use Act, already under review in the National Assembly as part of the six key constitution amendment areas.

Among other things, the commission was to serve as a national depository for land title instruments and also ease land ownership and use, that for years has been concentrated as part of the state powers.

'The purpose of the bill is to ease the stifling and chaotic land ownership and use, thereby facilitating its efficient administration for economic development,' said Tunde Akogun, the House Majority Leader, who customarily presents executive-sponsored bills like the defeated bill.

'The bill is proposed against the background of non-optimal utilisation of this abundantly available factor of production in the country. The bill is a necessary complement to the ongoing reform, for requisite economic development,' Mr. Akogun added.

Residual list
Lawmakers overwhelmingly voted against a second reading of the bill thereby ending the prospects of a commission which they said will take over the powers of the states.

'Land is a matter on the residual list and should be totally left to the states,' said Arole Fancy, (Action Congress, Lagos) who argued that the proposed commission would have been understandable if its jurisdiction were designed to be only the Federal Capital Territory.

The decision comes at a time the House is expecting the report of its Ad hoc committee on constitution review headed by the Deputy Speaker, Usman Nafada. The amendment proposals for the 1979 Land Use Act, was part of the six bills sent by the ailing president to the National Assembly last year in keeping with his administration's seven point agenda.

Both arms of the National Assembly had opted to deal with amendments related to the electoral reforms, which Mr. Yar'Adua also promised during his inauguration in 2007. The Senate began full consideration of its outcome on Tuesday, while the House of Representatives committee again failed to brings its report for deliberations.

The Land Reform aspect of the president's amendment proposals is expected to be tabled on a later date, after considerations of the electoral issues.

The establishment of the commission, though a 'necessary complement of the ongoing reform' according to Mr. Akogun, is regarded as an extra-constitution process, and was therefore to be carried out through a separate Act of the legislature.

Some lawmakers however argued against the opinion that the commission will usurp the powers of the states, advising that such areas be dealt with at the committee stage.

However, despite attempts to save the bill by the presiding Deputy Speaker, Mr. Nafada, majority of the lawmakers rejected his suggestion that the bill be stepped down for another day, and insisted on its outright rejection.