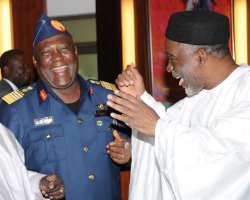 There was a mild drama Wednesday at the residence of Adamawa State Governor, Murtala Nyako, as the security operatives in his house locked all the entrances into the building. This prevented a member of the panel set up to investigate the allegations of gross misconduct against the governor from delivering a letter inviting him to appear before the committee.

However, Nyako's deputy, Mr. James Bala collected the invitation letter through his secretary, saying that he had no fears appearing before the panel because he had not committed any criminal offence.

Meanwhile, Nyako yesterday expressed confidence that he would survive the ongoing impeachment move against him, noting that he won't resign.

The panel secretary, Binanu R. Esthon, said that when all attempts to deliver the letter to Nyako failed, the panel members met and directed that the letter should be pasted on his gate.

'If you go to the governor's house now you will see the invitation letter pasted on his gate, the deputy governor's secretary received the letter on behalf of his boss', he stated.

He said that the panel would commence full sitting tomorrow since the governor and his deputy had been served with their letters of invitation to appear before the body to answer the allegations of gross misconduct the lawmakers levelled against them.

Nyako's political trauma got worsened last week when the High Court sitting in Yola presided over by the Acting Chief Judge, Justice Ambrose Mammadi, dismissed his application, asking it to stop the lawmakers from continuing with the impeachment process.

In his ruling, Mammadi said that Nyako's application lacked constitutional backing, pointing out that the Assembly members fully complied with all the sections under Section 188 of the 1999 constitution as amended.

Speaking to State House Correspondents after the launch of the Presidential Safe School Initiative aimed at providing conducive and safe environment for school children in the North east, Nyako remained upbeat about his chances of surviving the ongoing impeachment proceedings in his state.

His appearance at the Presidential Villa was the second in two days since the battle to remove him begun in Adamawa State. He had also attended the Council of State meeting chaired by President Goodluck Jonathan in the Villa on Tuesday.

Nyako, who claimed that the state was calm, noted that since the issue was before the court, he expected the lawmakers to obey the rules in anything they do.

He said, 'Well, it is in the court and the court said it was not well done. We are hoping that if they want to do it, they will do it following the normal process in whatever they want to do.'

Asked to confirm if he had been trying to reach out to Jonathan to come to his aid, the governor simply said: 'Not yet. It has not reached that crisis point.'

He, however,  did not rule out the possibility of seeking help from the President when the need arises, expressing hope that the man would step in since the state had also been there for the President, he too would intervene when it matters.

'We have supported him all this time; he has supported us and in situations like these when the President's support is required, we will seek it.'

On the issue of resignation, Nyako also said he was not considering that yet.

Asked to confirm if some former Heads of State had spoken to the President on his behalf, Nyako simply said: 'That will be excellent.' - Guardian.