Nigeria has no territorial ambition – Dasuki 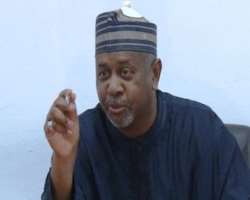 Nigeria has no territorial ambition €“ Dasuki
Listen to article

The National Security Adviser (NSA), Colonel Sambo Dasuki (retd), said on Wednesday 9 July that Nigeria respects the sovereignty of its neighbours and has no “territorial ambition” over the disputed Bakassi Peninsula with Cameroon.

Dasuki said this in Abuja at the opening of the Nigeria/Cameroon Trans-Border Security Committee holding from July 8-11.

“I wish to expressly say that Nigeria does not have any territorial ambition, the resolution on the Bakassi Peninsula issue is a clear indication to this.

“I therefore urge this delegation to make a case on the contentious issue of hot pursuit as the defeat of terrorism is going to be mutually beneficial.

“We should therefore look for every reason to collaborate rather than excuses not to,” Dasuki told the meeting.

The NSA said the security meeting held in Paris on May 17 and London on June 4, under the auspices of the leadership of both countries underscored the need for the meeting

“I wish to use this opportunity to extend the message of President Goodluck Jonathan that Nigeria is deeply committed to development, peace, security and stability in Africa in general and particularly in our neighbouring states.

“Specifically I want to emphasise the importance that Nigerian government attaches to the collaboration between our two countries on security and in which high level expert meeting is expected to consolidate,” he said.

Dasuki said that the forum would provide a unique opportunity for border security agencies of the two countries to meet and discuss issues that hitherto has been difficult.

He said through cooperation and collaboration, the issues have been brought to the negotiation table and were being addressed.

Dasuki said that the committee should objectivily deliberate on how best to collaborate and secure the Nigeria and Cameroon borders through the implementation of the security agreement.

He said that if the borders were secured, this would ensure peace and progress in both countries.

“The government of Nigeria also notes the support and continued show of solidarity from our Cameroonian counter-part in our joint effort to stamp out terrorism,” the NSA said.

He said that the outcome of the second session would play a key role in the instrumentation of the decision reached at the Paris and London meetings as well as the ministerial meeting schedule for September.

The NSA also commended the efforts of the Cameroonian forces in flushing out members of Boko Haram trying to seek refuge in Cameroon or trying to use the country as a launch pad for attacks on Nigeria.

Head of Cameroon Delegation, Rene Sadi, Minister of Territorial Administration and Decentralisation, said that the meeting would assist both countries to urgently take measures to wipe out criminality from the borders.

Sadi said that it is the responsibility of both countries to seek for appropriate ways and means to reinforce and consolidate the environment of peace and quietness along their common borders.

“The Cameroonian authority has called for strengthened vigilance along the borders because recently there have been an influx of refugees of which their identities and motives are known. All these measures are beginning to bear the desired fruit to pursue and we hope to pursue the implementation without respite.

Sadi said that Cameroon would deploy all resources in fighting this phenomenon, “which is no doubt an attempt against our fundamental value.”

Leader of the Nigerian Delegation, Maj.-Gen. Babatunde Samuel, said that the meeting was a follow-up to the first meeting held in Cameroon in November 2013.

“Our focus should be on efforts to combat the increasing criminality and terrorists activities on our common border and to encourage peaceful co-existence, and ensure security in our border communities,” Samuel said.