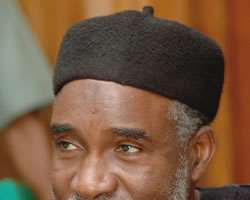 The days of the incumbent governor of Adamawa State Governor, Admiral Murtala Nyako (retd.), are numbered as despite the public holiday declared by the government, the seven-man panel set up by the outgoing Acting Chief Judge, Justice Ambrose Mammadi, began sitting in Yola on Monday.

Though the public holiday announced by Nyako was to cover Monday and Tuesday (today), but members of the panel commenced sitting at the popular Hotel J&J Holiday Villa in Yola, the state capital, amid tight security provided by both land and air troops.

Members of the panel, who were escorted by armed military personnel, began deliberations behind closed doors.

Though the terms of reference of the panel stipulate that its deliberation shall be held in public, journalists were barred from the venue of the sitting on Monday.

A combined team of soldiers and airmen as well as policemen surrounded the building and restricted entry and exit into the facility.

An Armoured Personnel Carrier, painted in Army green colour, was stationed at the entrance of the hotel while the armed guards were seen patrolling the area.

Earlier, there was an announcement that the Chief Registrar of the State High Court, Abubakar Babayola, was going to inaugurate the committee since the Ag. Chief Judge was due to retire on Monday (yesterday).

However, the sudden announcement of Monday and Tuesday as public holidays by Nyako forced a change of plans.

Reporters, who converged on the hotel to cover proceedings of the panel, were compelled to leave the venue when the soldiers on guard announced that they were under strict instructions not to allow any person other than committee members, witnesses and those being probed into the building.

The Chief Press Secretary to the Speaker of the House, Mr. Solomon Kumanga, who later addressed  reporters said the investigative panel assumed a life of its own as soon as it was inaugurated.

Also speaking to reporters in Yola on Monday, the Registrar of the State High Court, Abubakar Babayola, described the earlier proposed inauguration of the committee as a 'mere ceremony,' which was not a mandatory constitutional requirement.

Babayola had on Friday signed the statement announcing the composition of the committee on behalf of the outgoing acting CJ.

'The Hon. Acting Chief Judge Hon. Justice Ambrose D. Mammadi by the powers vested in him under Section 185(5) of the 1999 Constitution as (amended) has approved the appointment of seven man panel to investigate allegations of gross misconduct of the Executive Governor of Adamawa State Admiral Murtala Nyako and the Deputy Governor of Adamawa State Mr. Bala Ngilari,' the registrar had said.

Twenty out of the 25 lawmakers in the state had, as part of the impeachment proceedings, asked the chief judge to set up the committee.

The acting CJ, was said to be due for retirement on Monday (yesterday).

The Deputy Majority Leader in the state House of Assembly, Adamu Kamale, had berated the governor for declaring the work-free days, saying it was an attempt to prevent the panel from performing its duty.

He had said, 'The issue now is not before the House. There may be mischief to this in whichever way you look at it. But, already, the (acting) Chief Judge has set up the seven-man panel to investigate the governor and his deputy and there is no way they can block the CJ.

'In addition, praying to God is supposed to be a daily affair as most of our religions are practising it. For two days to be set aside as praying days, well I don't know his intention. I will have to read the statement probably I can pick something from it.'