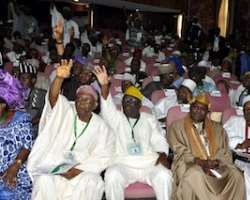 This followed the adoption of the principle delegate to the conference in their plenary on Thursday.

The conference rejected successfully navigated some of the intricate issues that havwe generated greatest concerns among Nigerians.

It rejected a single tenure of six years for the office of the president which was first mooted by President Goodluck Jonathan in the days of his administration, but recommended that there shall be rotational presidency among the six geo-political zones of the federation.

The conference alo took a proactive view of events like the dweath of an incumbent president, which was not properly addressed in the country's subsisting constitution.

Political pundits believe that much of the crises in the country today emanated from the unfortunate death of late President Umaru Yar'Adua in office and the subsequent takeover by his then vice Goodluck Jonthan.

To address the perceived lacuna, the conference recommended that upon the death of the president, the vice-president shall only act for 90 days, following which an election would be held to chose the substantive president.

The delegates also recommended the creation of additional 18 states and that there shall be a parity of states within the zones.

The delegates recommended that states wishing   to create or reduce local government depending on the dictates of each state are free to do so, while rejecting the present zonal structure of Nigeria's federation. All issues relating to local government councils were transferred to the states.

It was also their concensus that the ministers should brief the National Assembly on a quarterly basis. The delegates rejected unicameral legislature and approved that the functions of local governments to the state Houses of Assembly

On forms and content of government, it was agreed that a candidate for presidential election should run with a vice-presidential candidate as a ticket.

The delegates rejected that the president shall exercise full responsibility for his or her government by appointing only 18 ministers from the legislature and six geo-political zones.

It approved the recommendation that there shall be a referendum for states wishing to merge to be based on 75 per cent approval of affirmation and also that the National Assembly shall approve the merger of states with a simple majority, but the merged states shall not exist as a region.   It further recommended that states that decide to demerge should follow the same process.

The delegates approved that incase of death of the president that the vice-president shall only act for 90 days. This is against the status that brought President Goodluck Jonathan to office.

On state creation, the conference voted almost unanimously in support of the new state to be created for the South-east as a way of assuaging the acknowledged injustice meted to the people of Igbo extraction.

Similarly, the conference endorsed the recommendation that subsequently any new state shall have a minimum of one million population and the viability of the new states must be ascertained in order to put undue pressure on the existing ones.

The new state to be created from the South-south would be named later. It further recommended that creation of state should be less tedious.  This is apart from the additional state from the South-east zone. It rejected the recommendation for a modified presidential system.

The conference alao recommended that government should set up a committee to address the settlement of the Federal Capital Territory (FCT) indigenes, but rejected that FCT should be delineated into two senatorial districts.

It recommended that the armed forces should be recognised along the geo political zones, but ruled that states should be allowed to have their own constitution.

It recommended fiscal federalism for the purpose of creating wealth as well as the need to enshrine the modalities for referendum and financial autonomy for State Houses of Assembly. It recommended that the vehicles in any government officials' custody be reduced by 80 per cent.