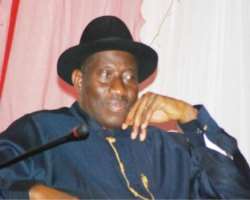 The Acting President Dr. Goodluck Jonathan has submitted the first batch of 25

ministerial nominees to the senate for screening.
Reports say that the list was sent to the upper chamber through the Presidential

time of this report only eight made the list, sources however said some old ministers

might make the second batch, there are 17 more names yet to be announced.

minister Ojo Maduekwe did not make the first batch, perhaps they might make the

second batch.
Among the new entrants, it is important to highlight the nomination a former speaker

of the House of Representatives Alhaji Aminu Masari. He was the Speaker between

2003-2007. The soft spoken politician provided the necessary support for former

especially when you measure it in terms of executive and legislative relationship.

succeed the then Gov. Yar'Adua who was endorsed as presidential candidate of the

PDP, only for things to work against the former speaker because Yar'Adua wanted

another person to succeed him. Reports have it that though Masari and Yar'Adua

come from the same state but they belong to a difference political camp.

Other big names who are on the list are, Mrs Josphine Anenih, wife of the PDP

a former senator who is very sound and influential and Labran Maku, former deputy