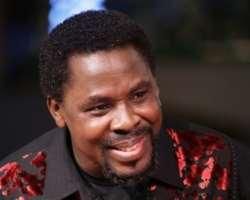 According to a report in Nigeria's Saturday Tribune, Prophet T. B Joshua of The Synagogue Church Of All Nations, prophesied that the Super Eagles of Nigeria would emerge victorious in their World Cup encounter with Kenya, sealing a ticket to the 2010 World Cup in the process.

The man of God, renowned for his accurate prophecies, is said to have further emphasised that Tunisia would lose against the Mambas of Mozambique in their qualifying match, thus paving the way for a World Cup ticket for Nigeria.

Remarkably, the prophecy came to pass with the Eagles snatching the World Cup ticket from the clutches of Tunisia in the last moments. The Super Eagles defeated the Harambee Stars of Kenya 3-2 courtesy of a second half brace from striker Obafemi Martins, just as the Tunisians succumbed to a lone goal from a tough Mozambique side in Maputo. The results sees Nigeria top their group with 12 points, Tunisia bowing out of the World Cup race with 11.

Prophet Joshua, Saturday Tribune gathered, also predicted a weekend of double celebrations for Nigeria as he said the Golden Eaglets would retain the FIFA U-17 title by beating Switzerland in tomorrow's final match of Nigeria 2009, in Abuja. Interestingly, the Nigerian starlet in contention for the prestigious Adidas Golden Boot, Sani Emmanuel, is reported to be one of T.B. Joshua's altar boys, having been brought up in his church. His goal tally currently stands at 5.

It will be recalled that Joshua also prophesied that Ghana's Black Satellites would lift the FIFA U-20 World Cup, Egypt 2009. On phone to Sellas Tetteh, Ghana's U-20 chief coach, Joshua told the coach specific details regarding their final match with Brazil, saying that the game would be goalless, penalties would determine the outcome and the Satellites captain Dede Ayew should take the first spot kick.