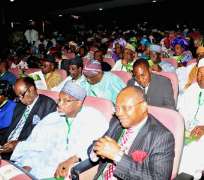 Intensive debate on Wednesday greeted the Report of the National Conference Committee on Political Restructuring and Forms of Government, presented to the Conference on Tuesday by the Committee's co-chairmen, General Ike Nwachukwu and Hon Mohammed Kumalia.


Although the Committee's recommendations are yet to be adopted by the Conference, high on the list is the creation of additional state for the South East geo-political zone, to place it on the same level with other zones.


Presently, out of the six geo-political zones in the country, only south East has five states. All other zones have six except the North West with seven. The recommendation for additional state seems to enjoy wide acceptability among the delegates.


The mandate of the committee as explained by the co -chairman was primarily to examine the extant structure and forms of governments in the context of the peculiar circumstances of Nigeria's diverse and multi-ethnic setting.


It also included examination of Nigeria's attendant challenges and the need to lay a solid foundation for an all-inclusive and cost-effective system of government which would serve the best interest of Nigeria and Nigerians.


Regarding creation of new states, the committee said such ambition must be backed by the viability of the proposed state in terms of economic potential, human, natural and material resources as well as minimum land and water mass.


The envisaged state according to the committee must have cultural and historical antecedent, with strong cultural affinity amongst its population while the component should be contiguous.


In addition, the committee insisted that for any new state to be created such a new state must have a minimum population of one million persons.

In its examination of Nigeria's political structure, the committee recommended a proper federal system of which has the central government and the states constituting the federating units.


It recommended that states that wish to merge can do so in accordance with the 1999 constitution as amended under three conditions:


The first being that such a merger receives support of two- third majority of all members in each of Houses of Assembly of states in which such a merger is proposed.


As a third condition, the committee said the above two procedures must receive a resolution passed by a simple majority of the members of the National Assembly in approval of the merger.


Based on this, it is also recommended that a list of local governments contained in the first schedule of the 1999 constitution as amended be removed and transferred to the state to be covered by the laws of the states' Houses of Assembly.


In view of the proposed restructuring, the committee also recommends the scrapping of the joint sates/local governments' account and the establishment of States Revenue Mobilization, Allocation and Fiscal Commission (SRMAFC) whose chairman and representatives of local government areas would be nominated by the governor, screened and confirmed by the state House of Assembly.


In allocating funds to the government, local government councils and between local councils of a state, the SRMAFC shall apply the same distribution principles adopted by the Revenue Mobilization, Allocation and Fiscal Commission to allocate funds from the federation account.


One of the attributes of the new system is that a candidate for an election to the office of the president shall run as a sole candidate and on election shall select a vice president from the legislature.


The committee also resolved that these provisions, as applicable to the president, shall apply with the necessary changes having been made, to the election of the Governor and the government under his charge.


Debate on the Committee report continues on Wednesday after which the Conference will decide on the decisions that should be recommended for implementation.