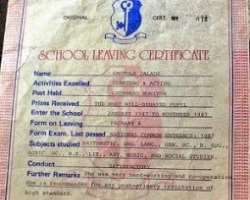 Sultry Nollywood star, Omotola Jolade-Ekeinde, no doubt, is one of the brilliant actors in the African movie industry today. She is one movie star that has shown that a lady can be beautiful, intelligent and still remain a very good wife.

No wonder her husband, Captain Mathew Ekeinde is very proud of her and will always stay with her no matter.

Also, no wonder her children are academically doing well in their various schools. Few weeks ago, the actress hailed one of her daughters, who was appointed as Head Girl of her school and the sexy mother of four did not mince word in describing her daughter as intelligent.

Omosexy, as she is fondly called, posted her primary school leaving certificate online and from the piece of photograph, she left school in flying colours. And if you have been wondering who her children took after, now you know.