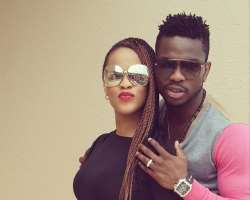 Following harsh reactions by Nigerians on Joseph Yobo over his involvement in the second goal that sent Nigeria packing from the 2014 FIFA World Cup in Brazil against France yesterday, his wife, Adaeze Igwe, has slammed her husband's critics.

The former Most Beautiful Girl in Nigeria (MBGN) winner hailed her husband for being the first Nigerian player to earn 100 caps for his country.

According to her, 'all you hateful people that didn't even realise it was own goal at first Heck, most of y'll didn't even watch that last minute part of the match that's if NEPA gave yu light to watch the game at all but as soon as they confirmed it was own goal by yobo' Y'all be like let's go ham on his wife (that b**ch) steady posting Louboutin pics on ig.#theirisgodo #toobadwelost but #goodgamefromyoboandtheteam #teamnigeria moving on, congrats to Joseph yobo for being the first Nigerian player to get to 100 caps. #recordholder #idontbreak #idontevenbend #ijustlaughatyourbitterness.'

Some Nigerians had blamed Adaeze for Yobo's performances, which they described as woeful. They alleged that since the defender married his wife, he has declined in his performances on the pitch.

France defeated Nigeria by 2-0 in the Second Rounds of the competition.

'I Don't Owe My Critics Any Apology' - Stella Oduah