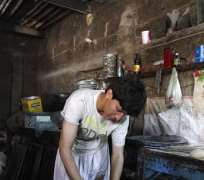 An Afghan worker makes sweets at a traditional factory ahead of the Islamic holy month of Ramadan in Kandahar southern of Kabul, Afghanistan, Saturday, June 28, 2014. Muslims throughout the world are preparing themselves for the holy month of Ramadan, when the observant fast from dawn till dusk. Allauddin Khan / AP Photo

BEIRUT — Across a wide belt that stretches halfway around the globe, the world's estimated 1.6 billion Muslims will mark the beginning of Ramadan this weekend. The holy season is marred by unprecedented turmoil, violence and sectarian hatreds that threaten to rip apart the Middle East, the epicenter of Islam.

Syria is bleeding. Militants have taken over large parts of Iraq. Lebanon, Libya, Pakistan, Afghanistan and Egypt are all battling Islamic extremists. Millions of war refugees are scattered across the landscape.

Although the bloodshed has eroded much of the Ramadan joy, millions of Shiite and Sunni Muslims will fast for grueling hours, both hoping for God's acceptance.

Some facts about Ramadan:
WHAT IS RAMADAN?
A Muslim holy month of fasting during which Muslims abstain from food, drink and other pleasures from sunrise to sunset. Ramadan is the time Muslims believe God started to reveal the Quran to the Prophet Muhammad. For believers, Ramadan is meant to be a time of reflection and worship, remembering the hardships of others and being charitable.

WHEN DOES RAMADAN BEGIN AND END?
Islam is based on a lunar calendar, so the start of Ramadan on the Gregorian calendar varies each year. Once the new crescent moon has been sighted, observance begins. The new moon at the end of the month signals Eid al-Fitr, a three-day festival marking the end of fasting. The majority of Shiites tend to mark Ramadan a day later than Sunnis, although this Ramadan is an exception and a rare event where Shiite and Sunnis will mark Ramadan together — at least in most places.

WHY FAST?
Fasting is one of the five basic tenets, or pillars, of Islam. Muslims give multiple other reasons: to teach empathy with the poor, learn self-control and show devotion to God. Islam exempts the elderly, young children, pregnant women and those who are ill or travelling from fasting. In some countries like Saudi Arabia and the Emirates, non-Muslims are banned from eating, drinking, or smoking in public during Ramadan. Other countries are more flexible.

INDULGENCE?
It may be a time for introspection but Ramadan can also be a time of indulgence. Much like Christmas or Thanksgiving in the Western world, Ramadan is a time for families and friends to gather for elaborate, fast-breaking daily meals known as iftars. There's a tendency to overeat and go wild on sweets. Prices go up. So-called Ramadan tents are popular venues, providing a place for people to meet after sunset to eat and smoke water pipes until the early morning hours.

WHY IS THERE MORE VIOLENCE?
Ramadan is a time of heightened religious fervor and militants typically step up their attacks during the month. Sunni extremists believe that attacks, especially suicide missions, during Ramadan are more blessed and rewarded by God.

Mehebes: Despite the perpetual turmoil of Iraq, one surviving tradition is mehebes, a popular game played during Ramadan where players hope to win sweets by guessing who among their opposing team is hiding a ring in their hands.

Pheni and Khajla: Discs of thin, deep-fried vermicelli and crispy, puffed up discs of flaky pastry soaked with milk and eaten for the pre-dawn meal, or Suhur, in Pakistan. Heaps of both items can be found at sweets shops and bakeries during the entire month. In Lebanon, Jordan and Palestinian territories, the equivalent is Qatayef and Kunafa.

Cannons: Before television and radio, it was the only way to alert people it was time to break the fast. A few places, such as Sharjah in the United Arab Emirates, have kept up the tradition. Every day at sunset during the holy month, cannon shots are fired from 12 locations at iftar time.

Lanterns: Traditional colored lanterns, also known as Fanoos, are an integral part of Ramadan in Egypt, where they are hung at the entrance of each building, supermarket and shop. The tradition is believed to date back to the Fatimid period and has spread to other countries in the Arab world.

Musaharati: A person entrusted with waking people up for a pre-dawn meal and prayers ahead of the day's fast by banging on drums. While the centuries-old tradition is fading away — phone alarms replacing the drumming — the custom is still alive in some parts of Beirut, Cairo and Gaza.

The typical drum cry goes:
“Oh, sleeping one, wake up and pray for God — Ramadan Kareem.”