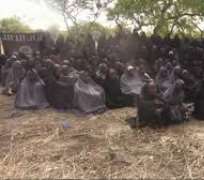 By Agency Reporter
United States announced Friday it had scaled down its surveillance flights in the search for schoolgirls abducted by Islamist militants at Government Secondary School, Chibok.

But the country added that the overall effort was unchanged due to more flights by other countries.

Pentagon spokesman Rear Admiral John Kirby told reporters was quoted by Reuters as saying, “We don't have any better idea today than we did before about where these girls are, but there's been no letup of the effort itself.”

Kirby, however, maintained that the same level of effort was being sustained now through international involvement.

A U.S. defence official speaking on condition of anonymity said U.S. flights had been reduced only after a body of intelligence had been gathered and that the cuts had been offset by British and French support.

Kirby denied a suggestion that U.S. flights over Nigeria had been reduced to accommodate increased U.S. surveillance over Iraq, where Washington is flying unmanned and manned aircraft to gather intelligence about Sunni insurgents.

He said some of the resources that were being used in Nigeria had been diverted from other missions in Africa and could now be used elsewhere on the continent.

The girls were kidnapped in April by militant Islamist group Boko Haram. Nigeria has been assisted in its search for them by the United States and other countries, including its neighbors.

Officials declined to say how long heightened U.S. surveillance over Nigeria had lasted. Asked whether it was just a week or two, the defence official said, “No. We were … building this baseline for a good period of time.”

U.S. military personnel are in Abuja helping to coordinate the effort, and some 80 others were sent to Chad in May to support the surveillance operation. Chad is northeast of Nigeria and borders the area in which Boko Haram is known to operate.

In the last month U.S. officials have played down expectations about a swift rescue of the girls and stressed the limitations of intelligence from surveillance flights.

One U.S. official voiced concerns that Boko Haram may have booby trapped areas where the girls could be held, and there have been reports that they may have been split up into small groups that are not being held in one place.

The defense official said surveillance alone would not lead to a resolution. “It will take … the Nigerian piece of the equation with their own sources and human intelligence coupled with the other forms to really understand the picture.”

In an opinion piece in the Washington Post on Friday Nigerian President Goodluck Jonathan said his government and security services had “spared no resources, have not stopped and will not stop until the girls are returned home.”