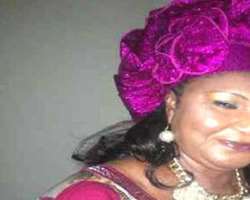 For Mrs. Ethel Nebo-Ezeabasili, the ousted former Chairman of the Enugu State Universal Education Board, it was sweet victory as an Enugu State High Court Presided over by Justice C.I Nwobodo last week declared her premature removal from office in 2012 as illegal and unconstitutional.

In a ruling that lasted several hours, the Court also awarded a N10 million damages and a N100,000 cost against the Governor Sullivan Chime-led government for 'illegal and unconstitutional actions against' Ezeabasili.

Mrs. Ezeabasili had approached the State High Court in Enugu to declare her removal from office as illegal and unconstitutional and to award her damages over a trumped up allegation that she embezzled over N245 million belonging to the Enugu State Government. Meanwhile, Ezeabasili who had fled the State over alleged attempts on her could not be reached to react to the judgment. However, her lawyer Chief Tagbo Ike said he was happy that the attempt to tarnish the integrity and reputation his client had built over the years had failed. He described the judgment as a 'triumph of justice over injustice and impunity'. 'This shows that evil and political tyranny will never prevail over truth, justice, and due process forever', he stressed. On his part, a civil society activist, Mr. Damian Okenwa described the judgment as victory for democracy. He added: 'The fact that the ruling was given by a courageous and Honourable Justice of the Enugu State High Court against a sitting government of the same state shows that the judiciary remains the last hope of the common man; and that all hope is not lost for this nation.

'The ruling is another food for thought for the State Government and a warning to retrace its steps. She has won the war by exposing to the world the manner of government we have in the state.' He further stressed that the former Enugu State SUBEB Chairman had also made a point to the effect that 'a public servant who has integrity and courage can say no to corrupt orders from even at his or her own peril'. It could be recalled that Ezeabasili was prematurely removed from office in 2012 following an alleged running battle between her and the Chief of Staff to Governor Sullivan Chime, Mrs. Nwobodo over the running of the State Universal Basic Education Board. In a petition at the time to the Insector-General of Police entitled 'Save my Soul: Threat to My Life, Harassment and Intimidation by Mrs. Ifeoma Nwobodo, Chief of Staff to the Governor of Enugu State' and dated February 13, 2013, Mrs. Ezeabasili had alleged that the crux of the onslaught against her by Mrs. Nwobodo was her 'principled stand against irregularities in award of contract.' She alleged that once she fought for and the state was able to access the matching grant for years 2009, 2010, and 2011, the Chief of Staff set up what she called Education Sector Committee with herself (Mrs. Nwobodo) as the Chairman and the Special Adviser to the Governor on Compliance, Mrs. Uche Nwoye as the Secretary. Other members were Commissioner for Education, Dr. Simon Ortuanya; the ENSUBEB Chairman, Mrs. Ethel Nebo Ezeabasili; former Attorney-General of Enugu State, Barr. Nduka Ikeyi; Executive Secretary, Economic Planning Commission, Mr. Dan Onyishi; and four Local Government Council Chairmen led by Mr. Cornelius Nnaji allegedly married to the governor's relation. She alleged that after several breach of the national Universal Basic Education Commission, UBEC guidelines, which the Executive Secretary of SPEB and herself called the attention of both the Governor and Mrs. Nwobodo severally to, another action plan was prepared to match the design of Mrs. Nwobodo.

She alleged: 'As soon as the Action Plan was approved, the Commissioner for Education in a letter Ref ENS/ME/COM/253/11/227 dated 10th July, 2012 informed me that a committee had been set up for the award of ENSUBEB Contracts. I was completely excluded. The Contract Award Committee rather than considering all the applications only considered a few and approved only four companies to execute a contract of 583 projects. 'The companies' names so approved were' New Techniques Nigeria Limited, Raycon Nigeria Limited, J&J Techno Nigeria Limited, and Akiota Work Nigeria Limited'. 'By the Procurement Act, no contractor is expected to tender or be awarded more than one lot, but in this case, the committee approved only four companies to execute 583 projects, in spite of the fact that I told them that it was not politically expedient and did not follow Due Process,' she alleged The former ENSUBEB Chairman also alleged that in addition to the N3.6 billion and 583 projects being carried out by four companies, 'Eremite Ltd was to roof all the school buildings while Intercolour Paints Ltd which was actually fronts was to supply all the paintings. 'I pointed out to them that the unit cost for the chairs was N8,000 by UBEC, but the Executive Secretary, Mr. Dan Onyishi was directed by the Chief of Staff to increase the budgetary allocation to the Ministry of Education to accommodate the increase to N29,000, and that will be an extra N21,000 (Twenty One Thousand Naira) per chair', she alleged.

Mrs. Ezeabasili explained that she held a meeting with the Chief of Staff on 30th October 2013, in which she told her that the method of the award of contracts was wrong, but was seriously upbraided by Mrs. Nwobodo. Her words: 'She shouted at me, raised threats and abuses and told me that His Excellency would do nothing as she was in control of Enugu State. She even boasted that His Excellency only views while she approves, and walked me out of her office. She told me there and then that I was joking with my life. 'She even threatened to deal with me and ensure that His Excellency removes me as Chairman of ENSUBEB.' The embattled former ENSUBEB Chairman told the Police IG in her petition that following the Chief of Staff's directives, a pre-bid meeting was held on 31st October 2010, but unknown to her, while the meeting was going on, Mrs. Nwobodo, 'sent people from the Government House and with the aid of Mr. Sylvester Nwoye, carted away 43 files in respect of projects without approval from me as Chief Executive and Accounting Officer'. She also complained that Mr. Nwoye who claimed protection by powers from above had bluntly refused to answer a query by the Head of Administration seeking explanation as to on whose authority he released the files. This and other such events resulted in a petition dated 2nd November 2012 by Mrs. Ezeabasili to the Director, State Security Service alleging an attempt on her life between Michael Okpara Square, Enugu and her office at the time. She alleged: 'A group of boys in a vehicle pursued my car trying to overtake it and making effort to block me, but I narrowly escaped. Same day at night, there were gunshots in front of my house. I am in great danger. I could not sleep in my house last night and so had to escape to a church where I passed the night to avoid being killed.'

The ousted ENSUBEB Chairman told the Police IG that things came to the worst when she could not open the bids which Mrs Nwobodo had allegedly restricted to only the four companies she listed, as other contractors went to court based on which one Barrister Ivy Obi and a Court Bailiff, one Obi served her and ENSUBEB restricting her from opening the bids. She alleged that she was attacked by the Chief of Staff's men in her Office once she announced she would not be able to open the bids based on the court processes and also refused to hand them the bid despite endless calls from the Chief of Staff and her cohorts. She added: 'I narrowly escaped death in my office; and later over thirty policemen and soldiers rushed into my office and remained there for days, while Mrs. Nwobodo phoned me and was mad at me. 'A distress call warned me to leave Enugu and that if I stayed till the next day, it would be difficult to leave town as the Chief of Staff had given directives to shoot me. I left Enugu hurriedly at 6.45 pm and took the new road to Abuja. I was on exile for two months during which period my 34 years old son who works in the Office of the Commissioner for Agriculture died. I could not see his corpse and I had no privilege of being at his burial.

'When the Chief of Staff, Ifeoma Nwobodo could not collect the bids from me or kill me, she, along with the Secretary to the State Government hurriedly dissolved my Board, which is tenure-based (to finally have he way) and I am challenging it in court.' The embattled Mrs. Ezeabasili explained that on her return to Enugu on 20th January 2013, the Attorney-General of Enugu State, aided and abetted by the Chief of Staff, Nwobodo, had written to the Nigeria Police informing them that she defrauded Enugu of over N245 Million.

She described the charges as trumped up and ironical because she was the one that tried best possible to preserve her integrity and state funds. She said: 'After careful and prudent vetting and auditing of salaries and leave allowances of primary school teachers (on assumption of office), my Board saved a total of N454 Million in ENSUBEB Local Government Authority Account; On April 2011, this sum was released to Government through JAAC for the payment of May 2011 salaries of teachers. My action did not go down well with my board members because they were angry that I declared the whole sum to Government and since then I have known no peace'. 'I have worked assiduously in my job to justify the confidence His Excellency reposed in me; unfortunately, my efforts to move education forward is being watered down by people like Mrs. Nwobodo who are in government and whose main preoccupation is to frustrate genuine efforts of hardworking and committed individuals like me, while ensuring that they give His Excellency the erroneous impression that they are loyal to him,' she had concluded.' While the Enugu people are all ears as they await the compliance of the Governor-Chime led administration to the court verdict, for Ezeabasili, a renowned politicians and woman activist, it is indeed a long walk to justice. Thisday