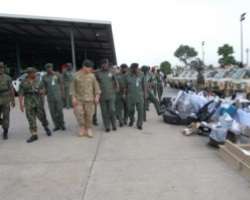 A statement by the U.S. Embassy in Nigeria said the equipment transferred included non-lethal transportation, communication, and force protection equipment.

The equipment was received by Ibrahim Sani, a Major General, from his U.S. counterpart, James Linder, a Brigadier General. The equipment is to support the Nigerian Army in the battle against terrorism.

Mr. Sani said the equipment will enhance the operational capabilities of the Nigerian Army.

The U.S. government has been supportive of the Nigerian government since the abduction of over 250 girls from their dormitory in Government Secondary School, Chibok in Borno State, on April 14.

About 219 of the girls are still in the custody of the Boko Haram despite the global outcry and condemnation that trailed their abduction.

The U.S. on Tuesday tried to clarify why the girls have not been freed despite the support of American officials in their search.

Ambassador Phillip Carter of the US African Command (AFRICOM) said in Accra that the U.S. government is only assisting the Nigerian government in the search for the girls.

'Fundamentally, the question of what this (the assistance to Nigeria) is achieving, that is a question you should pose to the Nigerian government and not AFRICOM,' he said.