Ekiti 2014: APC May Sue Over Abuse Of Human Rights 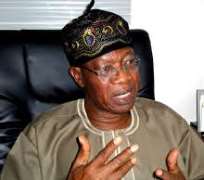 National Publicity Secretary of the All Progressives Congress, APC, Lai Mohammed, on Thursday morning clashed with the chairman of the Peoples Democratic Party, PDP, in Lagos State, Tunji Shelle over the just concluded governorship election in Ekiti State with Mohammed saying his party may go to court over infringement of the rights of its members.

Mohammed, in a live television programme monitored in Lagos, said the party was not going to challenge the election result, but that to show how grievous the harassment of governors in the party as well as party members by security agents was, the party may go to court to seek some explanations.

He also said some of its members like  Mrs. Fajuyi, was not only arrested, but whose house was vandalised, has contacted lawyers.

“We are going to challenge all these fabrications in court and then you would know we are serious,” he told Shelle.

His reaction came after Shelle on the same television programme claimed that the security agents barred the governors from entering Ekiti for a pre-election rally probably because they were armed with materials that could affect the successful conduct of the election.

Shelle had said the presence of the Minister of State for Defence, Musiliu Obanikoro and the Minister of Police Affairs, Jelili Adesiyan, in Ekiti the same day Governor Amaechi of Rivers State was barred from entering the state, was to ensure peace and carry out their official assignments.

“I know they were there, and lodged in Akure, but they were not there to cause any breach. People look for issues where there are none.

“Did you care to hear what the Edo State governor was carrying that could be inimical to the election? So was Amaechi,” he said adding that something must have happened that resulted in their being barred from the state.

Shelle, who commended the Independent National Electoral Commission and the security agencies for being professional during the election said the security agents became pro-active after an information that people were being moved from Lagos, Ondo and others states to cause problem in Ekiti and because of the threat to violence by the APC days to the election.

He also said those forcefully ejected from the state which included some accredited journalists, were in the state illegally.

He also said Fayemi lost because he was totally disconnected form the people, adding that the governor took loans with little to show for it, awarded projects to party leaders, owed civil servants and refused to conduct elections into the Local Council Development Areas he established a long time ago.

However, Lai Mohammed said the Ekiti election may create a negative effect as governors may now begin to think of satisfying “stomach infrastructure” rather than real dividends of democracy.

He said Fayemi immediately congratulated Fayose to show that election was not a do-or-die affair, but he questioned what he called unconstitutional actions that took place prior to the election, adding that the fact that the election was devoid of violence, it was not free and fair.

“Election is a process and what happens before, during and after…If you look at the entire incidents that happened before the election, then you might  come to the conclusion it was not free and fair,” Mohammed said reeling out some of the alleged infractions committed against his party.

He said apart from the attack on party members two weeks to the election, a vehicle was intercepted containing 200 boxes of INEC materials which INEC called wastes, and an aircraft with suspicious cargo landed at the Akure airport and nobody has explained why.

Mohammed said apart from stoppage of Amaechi and Oshiomhole, those, including him, who were able to enter Ekiti had to return to Lagos by road as the airport was shut. He said having worked in the aviation sector for about 10 years, he knew that airports are not closed without a notice which did not happen in this case.

He recalled that on the eve of the election, APC chieftains were harassed and arrested. “But we are democrats. What happened in terms of arresting selected people does not give credence to the election,” he said.

“I am surprised and amused that somebody would tell us that in Nigeria, our governor was stopped because he was probably carrying something in his helicopter. We are saying a governor was physically harassed…What was our offence that they would close airport?

“When you lock down a state with about 35,000 security agents…It is the opposition that is cowed and the tendency is for the people to stay indoors,” he said.

He said there were a lot of infringements on the Electoral Act which INEC overlooked.