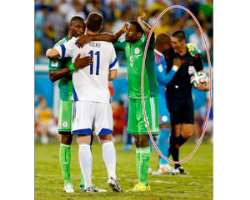 Last week, Bosnia-Herzegovina fell to Nigeria in a controversial match dotted with two separate referee incidents: an offsides call that negated a clear Bosnia-Herzegovina goal, and a no-call that allowed Nigeria to score. One could write both off to terrible officiating and unfortunate timing, were it not for the emergence of the above photo .

The photo, which comes directly from Getty Images and is not Photoshopped, shows New Zealand referee Peter O'Leary, in black, apparently celebrating with Nigerian goalkeeper Vincent Enyeama . That was enough to incite the rage of Bosnian fans, who created a petition with 23,000 signatures demanding the removal of O'Leary and a change in the score from 1-0 Nigeria to 1-1. (Good luck with that, friends.)

Petitions or not, the game burned in the hearts of both fans and players. “The referee was shameful,” said Bosnian striker Edin Dzeko , who scored the goal that was called back. “We are going home and we are sad because of that but this referee should be going home too. He changed the result and he changed the game. That's why we lost.”

O'Leary, meanwhile, has received death threats, but according to New Zealand colleagues, is trying to remain optimistic in the face of a tough situation. “Peter's good,” said New Zealand Football referee development officer Ken Wallace . “Obviously, he's frustrated by the fall-out, but I thought he had a very good game and looked like a top referee. He was happy with his performance, and so he should be, too.”