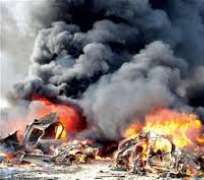 The dreaded terror group on Monday turned to Kano metropolis for its latest onslaught. The group bombed the School of Hygiene in the northern Nigeria city of Kano.

According to reports, a suicide bomber approached a line of students at the school before detonating the blast. At least 20 people were injured, and the death toll may rise.

Although no group immediately claimed responsibility, Boko Haram has targeted schools and tertiary institutions before because of its bitter opposition to secular education and co-ed schools.

The group, Boko Haram, has claimed responsibility for similar bomb blasts in the past.

The militant group has continued to say it is against western education. In April 2014, Boko Haram operatives abducted over 200 girls taking final year secondary school exams in Chibok.

Those killed and maimed Monday were new students who had lined up for a screening, local media reported. Kano's School of Hygiene trains nurses, midwives, public health workers and others.

The school, just behind the home of Nigeria's police chief, Mohammed Abubakar, was cordoned off by soldiers and police. Rescue workers from the Nigerian Red Cross and police recovered pieces of human flesh on the concrete-tiled floors with hand gloves and placed them in plastic bags.

Forensic experts combed the scene, while bomb disposal personnel swept the area to ensure no explosives remained. Traffic police and volunteers redirected traffic from the school,  which lies on a thoroughfare just outside the ancient city walls.

The college car park bore the main force of the blast, which badly damaged six cars, shattering their windscreens and denting panels. The ground was stained with blood.

Kano, a major West African trading hub, has not suffered as many attacks as towns and villages farther east and north, but there have nonetheless been regular attacks, including a bomb blast last month that killed six people.

Boko Haram has been active for more than a decade but stepped up its violent insurgency in 2009, with increasingly ferocious attacks on civilians.

The group is most widely known internationally for its kidnapping this year of more than 300 schoolgirls from Chibok town near the border with Cameroon. Most of the girls are still being held, with hopes fading for their release. The Nigerian government has ruled out negotiations with what it views as terrorists, while the military has said it will not carry out an operation to free the girls because of the likely high casualties.

Kano police commissioner Adelenre Shinaba told journalists that Monday's attack occurred at 2:05 p.m. and appeared to have been a suicide bombing. One suspect was apprehended and being interrogated, he said.

A teacher said the school was on holiday after second semester examinations, with only newly admitted students coming to the registration. “I believe the casualty would have been much higher had the school not closed for holiday,” said the teacher, who requested anonymity for safety's sake.

In recent times Nigeria has seen extremist attacks on villages, markets and bus stations, near churches and in traffic jams. In some cases the militia targets Christians, but many of its victims in northern Nigeria have been Muslims.

Last week at least 21 people watching a World Cup soccer match at a public screening venue were killed in Damaturu, the capital of Yobe state.

The Islamists have recently used a horrifying tactic: They have entered villages and towns disguised as military personnel, with uniforms and armed personnel carriers, ordered men to assemble in a central place and then opened fire with machine guns and heavy weapons.

Last weekend, at least 40 people were gunned down in villages near Chibok, Chuha A, Chuha B and Korongilim.

Large swaths of northeastern Nigeria are a war zone, and trade has been choked by attacks on northern roads, while thousands of farmers have abandoned their land because of the violence.

Gunmen sweep in and loot food and livestock, burn houses and shops, steal motorcycles and abduct women and young men.

About 12,000 people have been killed in the insurgency since 2009. Three northern states — Yobe, Borno and Adamawa — have been under a state of emergency since last year.