Argentina Clash: Eagles to get N10m for each goal 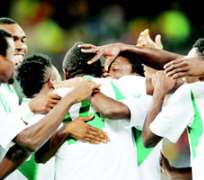 More Nigerians are out to motivate the Super Eagles to put up a winner against Argentina tomorrow in their last group game as an anonymous big shot has promised the team 10 million naira for each goal scored.

It was gathered that the money is meant to motivate the Eagles attack and make them put in their all into their last group game and subsequent games at the 2014 World Cup, if they progress.

When contacted, Emeka Inyama confirmed the offer, adding that it was coming independently of the Nigeria Football Federation (NFF) usual match bonus of 10,000 dollars.

It was gathered that several other Nigerians in Brazil are also offering cash for the Eagles to beat Argentina.

Nigeria started the campaign in Group F with a goalless draw against underdogs Iran, a result that brought about several criticism of the team.

The team in its second match against Bosnia and Hezergovina stepped up its game and was rewarded by a 29th minute goal courtesy of Osaze Odemwingie with an assist from Turkey based Emmanuel Emenike.

The Eagles are expected to put in their all against Argentina who top the group with six points from wins against Bosnia in their first game and a last minute goal against Iran.