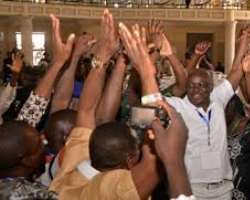 The Independent National Electoral Commission (INEC) has declared the candidate of the People's Democratic Party (PDP), Mr Ayodele Fayose as the winner of the June 21 governorship election in Ekiti State.

The returning officer in the election, who is also the Vice Chancellor of the Federal University, Oye Ekiti, Professor Isaac Azuzu, declared Fayose winner after votes from all voting precincts were tallied.

The result was announced in early hours of Sunday.

“Ayodele Peter Fayose of PDP having certified the requirement of the law and scored the highest number of votes is hereby declared the winner and is returned elected”, said.

Despite a number of political parties fielding candidates in the election, analysts had tipped the contest to be between the candidates of three parties– the incumbent governor, Kayode Fayemi of the APC, a former governor of the state, Ayo Fayose of the PDP, and a member of the House of Representatives, Opeyemi Bamidele of the LP.

Earlier the candidate of the PDP berated the use of money to sway the minds of electorates during the election insisting that he has left everything in the hands of God.

Speaking to journalists after casting his vote, Mr Fayose said “money for me in this game will destroy so many things and will destroy our future. For me, I have been in my house and I have left everything to God. Whichever way it goes, I have taken it as every good gift comes from God almighty.

“I have put in my best during the campaigns and I have left everything in the hands of God”, he said.

The incumbent governor and candidate of the All Progressives Congress (APC), also speaking after casting his vote noted that he had cause to speak to the Inspector General of Police after he failed to reach President Goodluck Jonathan.

He noted that he was compelled to reach them over the violation of the election procedure by the Minister of State for Defence, Musiliu Obanikoro.

In his words “I haven't been able to get Mr President or his Chief of Staff. I had cause this morning to speak to the Inspector-General of Police, not once, not twice, particularly about this minister of state who was violating the election procedure.

“I have also had cause to speak to the Chief of Army Staff about some untoward activities by his own men on the ground here”, he said.

He however noted that “it has not reached a stage where this should be escalated to the president yet but I will like to think that the president himself will not want a situation that throws Ekiti into jeopardy”.

Meanwhile, candidate of the Labour Party, Mr Bamidele Michael Opeyemi noted that “it feels good to participate in an election that will herald me into the office as the next governor of Ekiti State” insisting that “that is my fate, that is my belief and that is my conviction.

“I want to say that so far, the process appears reasonable and again my hope and prayer is that what I have witnessed here at my polling unit, will be the standard of what is going on in each and every of the 2,195 polling units being used by INEC to conduct this election “ he opined.

There are 2,195 polling units and 2, 803 voting points in the state and about 7,941 members of the National Youth Service Corps (NYSC) were engaged as ad-hoc staff to man the booths.

The incumbent was hoping to break the jinx of state governors not being re-elected after a first term, as no governor of the state has been elected for a second term since Nigeria's return to democracy in 1999 in the state.

According to reports, the governorship election which started at 8 am in almost all the 2,195 polling units located in all 16 Local governments in the State, though amid tight security, saw the deputy governor, Modupe Adelabu; Segun Oni, PDP defector, now All Progressives Congress (APC) stalwart; and some Governor Fayemi's aides lose their polling units and wards to PDP.

Reports said the PDP candidate won with a wide margin in almost all the 13 wards in Ado Ekiti, the state capital. Fayemi reportedly led the election in his Isan ward in Oye local government area while the LP candidate, Bamidele, performed brilliantly in most of the polling units in his Iyin Ekiti country home in Irepodun-Ifelodun local government area.

In a governorship election which many described as the fairest and most faultless election witnessed so far in Ekiti state, the sitting deputy governor, Dupe Adelabu on the platform of APC was beaten in her polling unit: CAC polling unit in Ado-Ekiti with PDP polling 304 votes; APC – 73 votes, while LP polled 26 votes.

most of the votes, even at former governor, Segun Oni's Local government-

votes, just as the serving senator of APC – Adetunmbi lost to PDP with PDP polling

The election gave lie to prediction of electoral violence by doomsday analysts ahead of the election as the the election was generally peaceful.

The three leading candidates, Governor Fayemi of the All Progressives Congress (APC), Hon. Opeyemi Bamidele of the Labour Party (LP) and Mr Ayo Fayose of the Peoples Democratic Party (PDP), hailed the conduct of the poll by the Independent National Electoral Commission (INEC) although Fayemi decried the presence of PDP leaders in the state and the alleged attempted abduction of APC leaders.

However, reactions of the two leading parties contending for the Ekiti top job have been varied.

While the APC leadership,Saturday night, issued a statement, rejecting the outcome of the election, the Minister of State for Defence, Senator Musiliu Obanikoro, welcomed the results.

“The people of Ekiti have spoken”, Obanikoro said.

Amid tight security, turn out of voters was impressive as the electorate made the sacrifice of trekking long distances to the polling booths to exercise their franchise.

The governor had commended INEC for the level of preparedness and the arrangement put in place for the election.

The governor, who spoke to newsmen, noted particularly the early arrival of electoral materials and the introduction of innovations to eliminate delays in the voting process and eradicate irregularities during elections.

The governor said that with this development, there were indications that the Ekiti election would record fewer hitches than that of Anambra in November 2013.

He, however, condemned what he described as attempted abduction of some of his party men like the alleged invasion of the house of an APC leader, Chief Dapo Awojolu at Egbe Ekiti in Gbonyin local government area of the state by some security operatives.

Fayemi equally said he was not comfortable with the presence of some prominent members of PDP in the state during the day of election, saying they had no business in Ekiti when the poll was going on.

He implored his people to remain calm and allow INEC officials to do their jobs.

AS expected, there was a huge turn out of voters at Afao Ekiti, the hometown of Fayose, the PDP candidate, who voted at his Afao Ward, Unit 001 in Irepodun-Ifelodun local government areas. He told newsmen after casting his voting that he would accept the outcome of the election no matter where the pendulum of victory swung.

Fayose said he would leave the out come of the governorship election to God. “I have campaigned enough. I did all that was necessary in this election. I know my people love me and they want to see me return as governor, but I will leave my fate to God”, the PDP candidate said.

He, however, said he was very disturbed by the alleged level of violence and inducement in some polling units, saying that was very alien to Nigeria's democracy and hoped it would not be repented in the 2015 general elections.

Labour Prty candidate, Bamidele, also expressed satisfaction about the conduct of the election.

He voted at his Iyin Ekiti Ward in Irepodun-Ifelodun local government area.

Bamidele said he was satisfied with the two stages of accreditation and voting, adding that he would be in a better position to assess the exercise at the end of the election.

He commended the law enforcement agencies for giving all the candidates a level playing ground. With the level of security put in place, he said, INEC would not have excuses to fail.

On the rumour that he had stepped down for Fayose, he said both the APC and PDP leaders had made overtures to him to step down for their candidates but he turned them down. ”The leadership of both APC and PDP made overtures to me but l turned them down. I remain a credible alternative. I never contemplated stepping down for any of them. That would have amounted to betrayal of my people,” the LP candidate said.