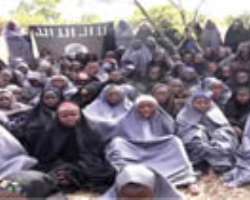 The Chairman, Presidential Fact-finding Committee on the Abduction of Chibok Schoolgirls, Brig.-Gen. Ibrahim Sabo (retd.),â€Ž yesterday disclosed that 219 students of the Government Secondary School, Chibok, Borno State are still missing after the abduction on April 14th by the terrorist sect. The 219 students were among the 276 girls said to have been snatched from the school during the midnight raid. Sabo while presenting the committee's report to President Goodluck Jonathan at the Presidential Villa, Abuja on Friday said that contrary to the opinion being held by some people that no student was abducted, his committee discovered that there was indeed a mass abduction at the school.

He said during the raid, 119 students managed to escape before their remaining colleagues were abducted.

Sabo added that among the 276 girls abducted, 57 girls managed to escape from their abductors while they were being moved through a zig-zag route.

He said, 'As most Nigerians already know, there were some persons who doubted whether, in fact, any student was abducted from Government Secondary School, Chibok.

'On the other hand, for those who believed that there was abduction, there were lingering doubts as to how such a number of kidnap victims were conveyed, considering also that information was sparse as to how the raiding insurgents evacuated the victims.

'Mr. President, the Committee here wishes to lay to rest any residual doubt whether or not any student was abducted at Chibok. There was mass abduction on the night of 14th April, 2014.

'During the siege on the school, 119 students escaped from the school premises, before the insurgents took away their classmates. A total number of 276 students were, thus, abducted.


Meanwhile, President Jonathan has said school owners, especially those in the North East, must henceforth be ready to provide adequate security if they must keep students in boarding houses.


Jonathan who spoke while receiving the Committee's report further said that henceforth school owners especially in the North East who want to keep students in boarding houses must be ready to put in place basic security provisions that would ensure the students' safety.

He said while he was not expecting that such school owners should secure the services of a battalion of soldiers, the presence of five policemen in Chibok school could have saved the situation on the night of the mass abduction.

He said, 'Everybody that own schools, especially in the North East, if they must keep students in boarding, there must be a basic security provision.

'I am not expecting a battalion of army in the schools but even if we had five policemen guiding that school that night, the students could not have been deceived into believing that the insurgents were taking them into protective custody.

'The story is that the abductors came in military uniforms and told the students that they are taking them to safety so that they won't be attacked by Boko Haram.

'If there were at least five policemen on duty that night, they would have alerted the students. Even if there would be abduction, the number could not have been as high as this.'

Describing terrorism as a sad event, Jonathan said it was painful for him because as he was talking, the girls were still in the hands of criminal elements.

Likening the situation to a country at war, the President said he would not rest on his oars until terror is crushed in the country because Nigeria could no longer live 'with the monster called Boko Haram.'

While saying that terror attack anywhere is an attack on everyone, Jonathan assured Nigerians that evil that the Boko Haram sect represent would not last forever.


Jonathan said â€Žcontrary to the belief that security agencies are not doing enough to end terrorism, they were doing their best.

He however added that he has charged them to do more to end insurgency.

Jonathan disclosed that his administration would not limit its anti-terrorism efforts to military intervention only as it is currently looking at economic issues to improve people's welfare.

In addition to his government's Almajiri schools programme, the President said he was also coming up with the Safe Schools Initiative.

He added that a Victim Support Fund would soon be floated to cater for children who have been orphaned by the activities of the sect as well as those whose business premises had been destroyed.

He said that would only be done after the abducted girls would have been rescued.

'The Federal Government is going to rebuild the Chibok school. We will use Army engineers to build a school that will be secured. All buildings there will be demolished and rebuilt. That will start after the children are rescued.

'On completion, the Federal Government will not manage the school because it is a state school. We will hand it over to the state government to manage,' he added.

He also assured the committee members that the Security Council would study their report and take the necessary steps.