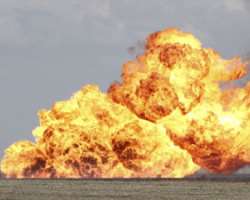 Scores of football lovers were on Tuesday feared killed in a blast that rocked a football viewing centre in Damaturu, Yobe State.

The victims were watching one of the World Cup matches involving Brazil and Mexico national teams when the explosion occurred some minutes after 8pm.

He said that the command, however, could not ascertained the extent of casualty in the blast.

'You know it happened just this night, we are yet to establish what happened and the details,' the police spokesman said.

Reuters reported that there was no immediate word on casualties from security operatives. However, a local TV Channel reported that many were feared dead while scores were injured.

The injured were taken to the Sani Abacha Specialist Hospital in Damaturu, according to the Lagos-based television station.