Crisis In Iraq: A Result of Reckless Global Interventions 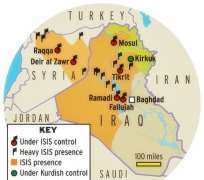 I published an article in Global Research, Center for Research on Globalization, on September 4th, 2013, captioned - 'Prison Break - Obama's Syria Endgame: New Al Qaeda 'Recruits' Dispatched to Syria' [http://www.globalresearch.ca/obamas-syria-endgame-new-al-qaeda-recruits-dispatched-to-syria/5348059]. It was and is an essential read toward understanding the present predicament in Iraq. In the article I visited several coincidental 'prison break' incidents happening rather openly around the Arab and Muslim world. Roughly 2000 of the worst Al-Qaeda terrorists in prisons from Libya, to Afghanistan and Iraq were broken out of jails in July of 2013, destination - Syria.

The world powers tolerated these releases of extremely high risk Al-Qaeda operatives in desperation for their employment in the mission to crumble the Assad regime. In February of 2014, the New York Times confirmed my assertions. Their article was captioned, 'Escaped Inmates From Iraq Fuel Syrian Insurgency.' [http://www.nytimes.com/2014/02/13/world/middleeast/escaped-inmates-from-iraq-fuel-syria-insurgency.html]. In it, New York Times editors, Tim Arango And Eric Schmitt confirmed the prior little talked about prison breaks which was formally nicknamed, 'Operation Breaking the Walls," further describing the role of these freed terrorists in the insurgency against Syria.

Frankly, the world has been complicit in the free proliferation of terror. The permission and utilization of terrorists in waging proxy wars on perceived enemies is mainstay in today's hypocritical, 'UN' world with nations pretending a non-direct intervention, but promoting radical dissension and internal and imported terrorist action. Sponsored, trained and armed by crazy Arab Monarchs and Western kaisers, radical Takfiri's who failed to topple the Syrian regime, turned their sights on Baghdad. Today the Islamic State in Iraq and Syria (ISIS) Takfiri's are in control of more than half of the territory between Iraq and Syria.

Al-Qaeda was not in Iraq in 2003 when the US invaded to expel Saddam Hussein, today, thanks to our employing their services in Syria, they are on the verge of taking over Iraq and registering the second terrorist nation in the world. Yes, the fall of Iraq or the creation of an ISIS state within, will be the second terrorist owned nation as a result of careless and reckless adventures of Global powers under the approval of the United Nations. Libya was the first.

The thoughtless employment of similar terrorists to topple the Gaddafi regime, known to be a regional stabilizer, has led to Libya being radical terrorist owned and a launch-pad for arms and terrorist training and recruitment across the Maghreb and to West Africa, primarily Nigeria. Mali fell victim to the spill-over of failed global intervention in Libya, Algeria continues to suffer and Boko Haram of Nigeria received a major boost.

Civilians bear the brunt of failed, careless and reckless global policy misadventures. We the people and civil right groups have to always clean-up the mess and die from it. It took the kidnapping of 234 girls and explosive global out cry for world players to finally treat Boko Haram as terrorists. It is understood that had situations turned out a bit differently, Boko Haram could have been encouraged as some sort of 'freedom fighters' and armed by these global super powers and Arab crazy monarchs on a campaign against Nigeria. This possible utility is what delayed their classification as terrorists. This type of foreign policy is what played out in Afghanistan in the 70's, is what played out in Libya, and is what was attempted in Syria and Iran.

The Middle East rests on a precarious balance right now. No simple end to this extreme escalation in conflict can be seen in any near future. Iraq and Syria can never return to the same nations with their previous borders. Terror and terror financing from these purposely created terror monsters promises far reaching painful and deadly consequences across the entire globe.

There must be a God conscious new world order with entirely new responsible leadership and accountability, and retribution for nations, no matter how powerful, that intentionally sponsor and promote deadly mischief, fuel sectarian crises and put the entire world at risk by encouraging global terror. We the people are tired of being executed.

Please join us at ENDS.ng and let us together DO Something.