“The world 'll respect Iran after we beat Nigeria' 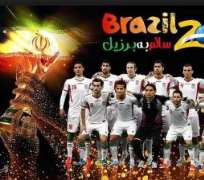 The Iranian national team are not happy with the perception of many soccer fans and opponents in the Brazil World Cup. They are saddened when people refer to them as the whipping team of Group F even before the first ball is kicked today against Nigeria. And so, they have agreed to use Nigeria's game today to gain global recognition. Pejman Montazeri is one of so many members of the Iranian team, who want to use the on-going World Cup to put their careers in the international transfer window.

A defender in the team coached by Carlos Quiroz, Montazeri and his mates spent much of Saturday afternoon practicing on set pieces at the Corintinas Football Club's pitch in Sao Paolo. A Farsi-speaking Iranian, Montazeri, said through an interpreter that the Asian team is in Brazil to show that Iranian football has outgrown the era when they were easy meat for every team at the Mundial Coupe. 'We are not bothered by what people think of us. Everywhere you go you hear people say that we are the poor members of our group, but Monday will show who actually is the poor team here,' he said. We will definitely try to make our country proud. Our first and main objective is against Nigeria and we have to focus on that.'  Also speaking on the team's chances against Nigeria, goalkeepers\ coach, Dan Gaspar believes his team will earn the respect of soccer fans around the world if they beat Nigeria. 'We are probably the team that is the least recognized, the least known of all the other 31 teams,' he said, adding, 'but the one thing that I can guarantee is that after 90 minutes we will earn the respect of the Nigerians, we will earn the respect of the football fans and the world will begin to recognize the level of play that we have on our team. 'The players are confident yet humble. This team is prepared to sacrifice, to suffer, to fight with humility and represent Iran the best possible way.'