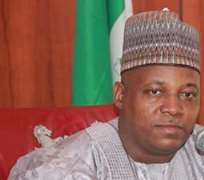 Alhaji Baba Kaka, the Commissioner for Local Government and Chieftaincy Affairs , who presented letter to the new emir in Maiduguri, urged him to uphold the good virtues exhibited by his late father.

He said that Shehu's  appointment  took effect from June 12.

Kaka said that Shehu's selection was in line with the people's choice as well as the entire members of the Gwoza Emirate council.

'Gwoza has witnessed many challenges, including ethnic and religious differences among its people.

'You should strive hard to unite the people of Gwoza irrespective of their differences.'

The commissioner consoled the people of Gwoza Emirate over the demise of the former emir and prayed God to grant his soul eternal peace.

In his remark, Shehu thanked the Almighty God for giving him the opportunity to succeed his late father.

He pledged to justify the confidence reposed in him by the people and promised to carry everybody along.

The last emir died after an attack on his motorcade by insurgents on his way to Gombe to condole the people over the death of Emir of Gombe.(NAN)