Forces out to truncate democracy - Jonathan 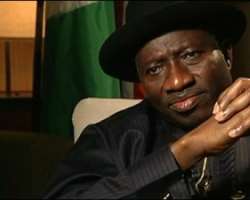 President Goodluck Jonathan, yesterday, raised alarm that some anti-democratic forces were exploiting lapses in the management of the nation's political and electoral processes to derail the 2015 general elections.

President Jonathan spoke on a day a host of governors and eminent Nigerians, including delegates to the National Conference, honoured Abiola and stressed the need to deepen democracy in the country by making votes at elections count.

He expressed worry that some politicians make unguarded utterances in a bid to capture power and after they fail to grab power because of what they had said, their followers capitalize on that and cause mayhem.

'There are still very remorseless anti-democratic forces operating in the political system, ever ready to exploit lapses in the management of our political and electoral processes. Some of these forces may indeed during the forth-coming elections, through their lifestyle, truncate the nation's hard-won democratic liberty.

'But dear compatriots, with respect to the 2015 elections in particular and our journey as a nation in general, we must never allow these negative forces to prevail. The onset of the Fourth Republic, the institutionalization of the inter-party mechanism was domiciled in the office of the Special Adviser to the President on Inter-Party Affairs.

'Article 7 of the code states that: 'No political party or candidate shall during campaign, resort to the use of inflammatory language, provocative actions, images or manifestation that incite violence, hatred, contempt or intimidation against another party or candidate, or any person or group of persons on grounds of ethnicity, gender or for any other reason,' he said.

Earlier, the Chairman of the Independent National Electoral Commission, Prof. Attahiru Jega, had deplored the incessant changing of political parties by politicians, branding such act as 'political nomadism.'

In the same vein, the Chairman of the occasion and former Head of State, Gen. Abdulsalami Abubakar cautioned political leaders against making inciting statements.

Abubakar said that the current political atmosphere is charged, and compared it to the situation of the country when he took over government after the death of Gen. Sani Abacha in 1998.

Those in attendance include a National Leader of All Progressives Congress and a former Head of State, Gen. Muhammad Buhari (retd.), a former Vice President, Dr. Alex Ekwueme, a former Deputy Head of State and General Chief of Staff, Commodore. Ebitu Ukiwe (retd.), representatives of former President Shehu Shagari, and of the major political parties including the Chairman, Peoples Democratic Party, Adamu Mu'azu.