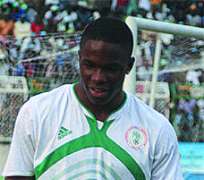 Anichebe
Everton's boss, David Moyes, has challenged Victor Anichebe to prove he deserves a regular run in the side. Anichebe looked set to be on his way out of Goodison Park last season following a training ground bust-up with Moyes after a loan move to Hull City was blocked.

The 21-year-old has found himself back in favour in recent weeks and scored a stunning goal in last weekend's draw at Birmingham. Moyes said Anichebe had all the attributes to be a success, but has warned the player he must work harder if he wants to achieve his ambitions.

“The penny is beginning to drop with him,” said Moyes.

“In the modern game, you must work hard in training and it makes your job at the weekend easier.

“The lad has all the attributes to be a good modern-day footballer.

“But he has to work harder at his game. “He has to decide how much he wants it and the way you show it is by what you do on the field. We have shown confidence in him by giving him a run in the team and a chance to show what he can do. “He knows how we feel. We like him, he must just give more.”

Anichebe is a product of Everton's Youth Academy and made his reserve team debut as a 15-year-old. Anichebe made his first team debut less than two years later on 28 January, 2006, as a substitute in the 89th minute of Everton's FA Cup 4th round tie against Chelsea, replacing Simon Davies. Victor signed his first professional contract with Everton in April, 2006, putting pen to paper on a deal that would keep him at Goodison Park until 2008.

His second Everton appearance came on 22 April, 2006 when he was brought on with five minutes to go against Birmingham City F.C in May, 2006. Anichebe picked the 'Reserve Player of the season Award' for the 2005-06 season. Shortly after, on May 7, he scored his first Premiership goal against West Bromwich Albion. The 18-year-old turned his man and shot through the legs of Albion's keeper, Tomasz Kuszczak.

Anichebe quickly became a fan favourite at Everton as he topped the 2006-07 pre-season scoring chart with four goals in six appearances, including a brace at Bury. Anichebe scored his first two Premiership goals of the 2006-07 campaign in a 3-0 win against Newcastle United F.C. on 30 December, 2006. On 2 May, 2007, it was announced that Anichebe had extended his current contract with Everton until the summer of 2011.

In the 2007-08 season, the teenage striker struck four times in the UEFA Cup, against Metalist Kharkiv, Greek side Larissa, German's 1. FC Nuremberg and SK Brann of Norway after coming on as a late second half substitute in many of the games. He was dubbed Everton's European “Secret Weapon” by the fans and media because of his success in the competition. His success in the UEFA Cup is believed to be because of European defenders inabilities to deal with his fast-pace and strength.

On 7 May, 2008, Anichebe was voted by Everton fans to be the young player of the season for 2007/08. Although a striker, manager David Moyes has occasionally called upon Anichebe to play in the right midfield position.

On 22 February, 2009, Anichebe was a victim of a horror tackle by Kevin Nolan during Everton's premier league match with Newcastle United. This would keep him out of action for almost a year but he made his return to the pitch on the 27th January 2010 in Everton's 2-0 victory over Sunderland.

He scored his first goal after the injury in Everton's 2-2 draw with Birmingham on 13 March 2010.