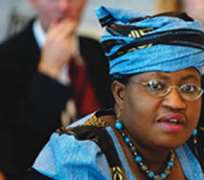 The Federal Government is seeking $200m 'soft credit' from the German Government for the establishment of a development bank, the Minister of Finance, Dr Ngozi Okonjo-Iweala, said on Thursday.

Okonjo-Iweala made the statement when a delegation of the German Government visited her in Abuja, adding that a Development Bank of Nigeria was needed to ensure long-term loans for development of the country.

She said Nigeria had excellent relations with Germany and would want it to support growth and development in strategic areas of its economy.

She said, 'One of the areas is industrial revolution plan, which we have just launched; we think that we need to manufacture more things in Nigeria because we have a large market.

'We think that Germany can be of great assistance to us in sharing knowledge with us on how it has been able to organise itself to have the right skills at the right industries.

'We want to know, if we are going into manufacturing, how we can do that.

'The second area is that we admire the way that you built your development bank, KFW.

'Nigeria is building a development bank; the president and the vice-president have pushed very hard for us to have long-term money in this economy.

'We want you to support. We are negotiating with you about $200m of support in soft credit form.'

The minister said that in manufacturing, Nigeria would give priority to electronics and cars, especially with the large market in the country.

On the state of the nation's economy, she said that with the re-based Gross Domestic Product, Nigeria remained the largest economy in Africa with $510bn.

She added that with per capita income of $2,668, the country still maintained its status as a low-income nation with a positive growth rate of 7 per cent.

Okonjo-Iweala said that the economy had maintained a stable macro-economic framework with debt to GDP ratio of one per cent 'with the rebased GDP'.

'Our inflation rate is eight per cent at one digit and our reserve is relatively good,' she said.

The minister, however, stated that the nation was faced with three major challenges of jobs creation, inclusion and high inequality.

She explained that the Federal Government had initiated projects geared toward ensuring inclusive growth and job creation.

According her, the projects include power sector reforms, infrastructure development and mortgage refinancing.

Earlier, the leader of the German delegation, Mr Gerd Mueller, said that the aim of the visit was for the minister to educate them on current economic developments in Nigeria.

'Nigeria is very important and prominent in the region and we know that you are very prominent in the Nigerian government and so our visit is for you to inform us of the current economic situation in the country,' Mueller said.

He said the team wanted to be briefed on the specific development in the security situation in Nigeria.

He said, 'Germany would love to partner Nigeria in agriculture development so as to create a green centre to enhance research in the sector.'

According to him, the centre will look at issues of alternative sources of energy, such as solar, bio-mass, among others.

Mueller, who is Germany's Minister of Development Operations, added that the green center would facilitate exchange of scientists in research to help Nigeria to boost its agricultural sector and be able to feed itself.

He promised that the German Government would look at requests for assistance made by the Federal Government, especially support for economic development.

He said only existing German companies in Nigeria understood the business environment.

He said Nigeria needed to participate in the forthcoming 80th anniversary of the association to inform the business community of its potential.

'The broad spectrum of SMEs in Germany does not know anything about Nigeria and important growth rate in Africa.

'They need to know about the improving economic frameworks, business opportunities, business climate and regulations in Africa and Nigeria, in particular,' he said.

He said the current volume of investment between Nigeria and Germany stood at 1.42bn euros. NAN