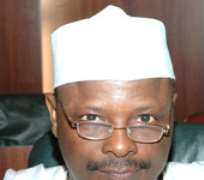 Writing on his Twitter page on Wednesday which was also posted on the Facebook page of his Director of Press and Public Relations, Baba Dantiye, the governor said his government followed the same process which his counterpart in Gombe State, Ibrahim Dankwambo, used in appointing the Emir of Gombe.

'Mr. President doesn't seem to know where his power starts and where it stops. The appointment of an emir is purely a state affair. I am happy to say that nobody has questioned the eligibility of the new emir.

'They did not even fault or question the process. We are happy because he is well educated and exposed both nationally and internationally. What business has the Federal Government with the appointment of the Emir of Kano.

'If there is Emir of Nigeria, let him go and appoint him. My feeling is that they have more than enough security problems, especially finding the Chibok girls than sending police to go and block the Emir of Kano's palace just because of Sanusi,' he said.

Arguing that the President had been instructing his 'supporters and stooges' to unleash mayhem on the state, he lamented that the protesters had begun destroying government property.

'I have told my friends, and people of Kano, other Nigerians and indeed the international community to hold Jonathan responsible for whatever happens to Kwankwaso, his family or even the people of Kano State,' he said.