WHY CRISIS PERSISTS OVER YAR'ADUA'S HEALTH 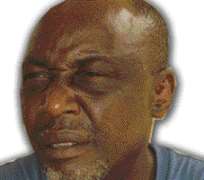 Morro
Comrade Abba Morro is the Benue State Co-ordinator of Yar'Adua/Jonathan Campaign Organisation. A former governorship aspirant in the 2007 election and one of the most vibrant local goverment chairmen the state has ever had. In this interveiw, the Chairman, Governing Council of University of Agriculture, Makurdi, expresses sadness that the recent imbroglio that the nation was thrown into due to the absence of ailing President Umar Musa Yar'Adua would not have occurred if the political class had managed the situation in a more mature manner.

Excerpts:
The political class
Let me start by saying that what happened in this country, the agitation that I refer to as unnecessary, is the inability of the political class to handle a constitutional situation very satisfactorily and effectively. Transmission and non-transmission of power has become a very serious issue that has become very internationalized. Where is the political maturity, where is the political culture nurtured on the grounds of patriotism, nobility and honour? How many elected officers today will accept that they have failed and tell their people that, 'I'm sorry, I won't run again? So, I agree with you absolutely that the situation has been handled very inappropriately.

If the political class were alive to their responsibility, and if they had anticipated the mood of the people, it would have been very easy to say from the beginning that this is the state of health of Mr. President, and that with the present state of health of Mr. President, even though the constitution requires him to transmit a letter to the National Assembly, he cannot transmit a letter and again go further to assure Nigerians that the present administration could be all hope not lost and the same people that are in the corridors of power especially the Presidency should have urged Nigerians to pray for their country and the President.

I can tell you if that was the step that was taken from the beginning, this controversy wouldn't have been there. When Nigerians who should know are telling us that they don't know either knowingly or mischievously, or when people who should know come forth to say that they don't know or begin to issue distorted stories about the state of affairs in this country, then it gives room for a lot of apprehension.

Jos: The wayforward
Well, there is no doubt about the fact that the crisis in Jos is as political as religious. Remember that the religious crisis in Jos in 2008 emanated from the desire to have an election in a particular place, and the imposition of a particular person or group of persons whose religion did not tally with the religion of the majority of people in that environment and so, to that extent you may say that the problems are more political than religious. It has assumed religious dimension and has dovetailed into a situation of indigenes versus non indigenes. I think that we must look beyond these two aspects of religion and politics because inevitably, you cannot separate religion from politics in the final analysis. But the point is this, if it happens in Jos, it boomerangs in Ababaliki, or Umuahia.

If it happens in Kaduna, it boomerangs in Ibadan or Enugu. It is a situation of do me, I do you, hit me, I hit you. Yoruba are attacked in Kano and Hausa and Yoruba in Lagos become arch-enemies. That should tell you the fragility of our politics and the level of our tolerance of ourselves, the extent to which we accept and reject ourselves and because Nigeria is a multi-tribal, multi-ethnic society, unless we imbibe the patriotism of accepting ourselves as one Nigeria, unless we do that this problem will continue to be there. Until a Yoruba person sees himself as Nigerian first of the Igbo or Hausa, Idoma, Tiv person sees himself as Nigerian first, we will continue to have this problem of indigene or non indigene.

They have spoken because we have created a problem for which they want to speak on. Otherwise, I want to assume like many Nigerians have noticed that the Vice President is not under any burden at the moment in discharging his responsibility as Acting President of this country. The mere connotation of acting, simply means taking on the burden that ordinarily he won't be taking on if the principal is in. And so, I don't want to be-labour the issue of the Vice President presiding over security and the Federal Executives Council meetings giving directions. Where is the leadership vacuum that one is talking about? Executive council meetings are holding, Security Council meetings are holding, policy directions are given, issues are discussed, and decisions are taken. And so, I personally do not think really that we should be heating up the polity unnecessarily. And if you watch very carefully, you would discover that the whole argument, the whole agitation is eating deep into the fabrics of the nation.

The ministers who have taken decisions on the state of the nation are apparently contradicting themselves because we have wittingly externalized problems that are purely internal. And I don't want you to believe that unless we are seen by the mirrors of the western world, the western media, we are not seeing ourselves. I want to say that past heads of states have indicated that their own times too, they have had cause to travel out of the country either on medical grounds or on vacations.

You don't hear any hues and cries about them. But today, our nation is polarized; our nation appears divided between avoidable controversies.

Dora Akunyili
Well, if you are talking about the Minister of Information I don't know about that, but I am saying that the principle of organisation, the basic principle of management is predicated on the fact that majority carry the vote. And where a majority opinion has been aired, you either abide by it or if you are dissatisfied, you resign.

Obasanjo's advice to Yar'Adua to resign
It is not only Obasanjo that has advised the President to resign or that has asked the President to write a letter to the National Assembly. Very eminent Nigerians like you have said, former heads of state, ACF, Northern Union, Niger-Delta Forum, South-South forum and the rest of them have all clamoured for one position or the other including resignation. So, it's not a matter of justification in this matter. The pronouncement of Obasanjo again cannot work. And if you recall, many persons have also said in Nigeria here today that Obasanjo is partly responsible for the problems that we find ourselves in today, no matter the justification of 'yes I got his medical certificate' and the rest of them.

Imposition of Obasanjo on Nigeria
Let me tell you, the issue of imposition does not arise here. You would remember that when we were transmitting to a democracy, Nigeria was on a tree hanger, everybody was afraid of tomorrow. Everybody was looking for a salvation army; who do we elect as president of this country that can keep the peace of this country ? And don't forget, I was part of the process. I was in the convention in Jos where Obasanjo was unanimously, so to say elected to fly the flag of the PDP. And don't forget that he was not the only candidate or PDP was not the only party that participated in that election. So, by whatever means, by the political machinery that was unleashed on Nigeria by the military, he happened to be the candidate that majority of Nigerian by whatever means elected to be president. It was not question of imposition. I can tell you because I was part of it. I was a delegate, I voted, I canvassed for votes in that convention. The question of imposition does not arise.

Nigeria had to start from somewhere, and Nigerians either mistakenly assumed that Obasanjo comes from the West. Don't forget that the history and the trauma of the annulment of the June 12 elections was still very much with us; the ghost was very much with us. And so, many Nigerians were thinking about how to lay to rest the ghost of June 12. Also, majority of us at that time said that the only way to assuage the nerves of the west for being shortchanged from producing the president of this country was to elect another Yoruba person from that axis from the same region. It was said at that time, that that was the best way to perhaps assuage the nerves of the west at that time.

We were looking for a strong willed person that can wield Nigeria together after a division that the annulment of the election caused, and after the annulment of several transition processes. So, if Obasanjo came and didn't do to the expectations of Nigerians, I want to say that it is not as a result of those who chose him. But quite frankly, I want to say that even as they say, Obasanjo was not an abysmal failure. I know that the reason why many Nigerians are unhappy with him today is the fact that he was trying to manipulate the system to get a third term which was alien to our constitution. Otherwise, I can tell you that the foundation that we are building on today was part and parcel of what Obasanjo did. I am not saying that he didn't fail in some aspects.

Including rigging election?
Well, again that is where we Nigerians go wrong. I am not an apostle of rigging but there is no history of any political arrangement in the world where there is no rigging. The magnitude might be bad, the result might be bad bringing us the consequences of bad leadership, bad policies and bad foundation.

Having said that, democracies all over the world witness rigging even in the most advanced countries of the world there is rigging. And let me tell you, people have said it and I am sure you are not going to hear it for the first time, that you cannot rig in the territory where you are not accepted.

So, we will be talking about the magnitude of rigging in terms of Nigeria, and other counties of the world. But to say there is no rigging in elections all over the world is not correct. That is why I say we must take with a pinch of salt criticisms of Nigeria by the west because you would agree with me that they are part and parcel of our problems.

What is haunting us today is our colonial past, and if those people had not hurriedly been chased out of this country, if they had continued to develop this country or the countries they colonized, they would have laid proper foundation for better utilization.