You Are Killing Yourselves With Make-ups--Ruggedman Warns Ladies 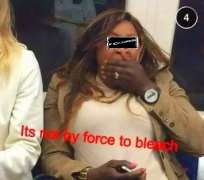 Nigerian rapper, Michael Stephens aka Rugged Man, has lent out his voice on ladies who uses all sort of cosmetics all in the name of beauty.

The artiste expressed his mind that ladies are better admired the way they are natural, compared to when they start using all sort of cosmetics which in turn, will become a health challenge on them.

According to him, 'I speak for men all over the world when i say "ladies we love you no matter your complexion,pls stop this chemical warfare on your skins."

Ruggedman launched himself into the music industry in 1999, eventually becoming the most featured rapper in Nigeria. His albums are all released on his personal label, Rugged Records. I Am Making An Impact In The Society--Cossy Orjiakor Boasts