Emir-ship: How our plane was grounded in Kano, Gov. Amaechi 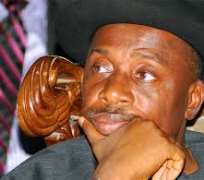 The Rivers state Governor, Rotimi Amaechi, has recounted how his chartered flight was on barred from take-off in Kano, where he had gone to commiserate with the kano State Government over the death of the Emir, Ado Bayero.

He said that he and his colleagues were still in Kano when a former Governor of the Central Bank of Nigeria, Lamido Sanusi, was named the new emir of the powerful Kano emirate.

Premium Times, quoting a source, reports however that  Mr. Amaechi and a few other chieftains of the opposition All Progressives Congress poured into Kano after receiving intelligence that some northern traditional rulers sympathetic to the ruling Peoples Democratic Party, PDP, were putting pressure on the kingmakers and Governor Rabiu Kwankawaso to overlook Mr. Sanusi and appoint his rival to the coveted throne.

Responding to a PREMIUM TIMES enquiry on Monday morning, Mr. Amaechi said after visiting Governor Kwankwaso, he, along with other dignitaries, made for the Aminu Kano Airport where his chartered aircraft was parked.

He said immediately his team entered the airport buildings preparatory to boarding the plane back to Abuja, authorities locked all the doors to the complex, holding him and his colleagues hostage.

The plane was also impounded, he said.
'The Kano governor called the airport commandant that we should at least be allowed to leave the building but the commandant refused saying he had an order from above not to let us out,' the governor said. 'We had to force one of the doors open to get away.'

He said after they escaped from the airport, the team devised a means of hurrying out of Kano for fear they might be attacked by thugs sponsored by the federal government.

'So we quickly got a car, bought fuel and started driving towards Abuja. We sold a dummy to the airport people and a few others that we were returning to the Kano Government House. The governor was also expecting us. But we were far gone. I personally drove the car and all of us had to switch off our phones so no one would know our whereabouts.

'I drove for five hours and we arrived Abuja at 2 a.m. We were not afraid of armed robbers or anyone attacking us on the road. We were only afraid that the authorities could plant people on the road to waylay and attack us. But thank God we arrived safe.

'I have been shouting that we are in a dictatorship, people thought I'm joking or exaggerating,' Mr. Amaechi said. 'At least we can all see what is playing out.'