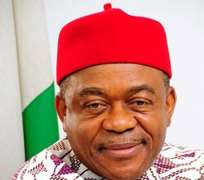 Governors of South-East geo-political zone rose from their meeting in Enugu Sunday condemning the June 5 attempt by pro-Biafran movement, Biafran Zionist Federation (BZF), to declare Biafra in the area.

Expressing disgust at the attempt, which it said was the second after an earlier failed bid to hoist Biafran flag at the Enugu Government House, the governors said they would stop at nothing in ensuring the protection of lives and property.

They condemned the invasion of the Enugu State Broadcasting Corporation (ESBS) by the group, stating that it would not allow the Benjamin Onwuka-led group to continue to undermine security in the zone, but would rather collaborate with other zones across the country to provide security.

Meanwhile, they regretted the passage of the former Minister of Information, Prof. Dora Akunyili, commiserating with the family. They resolved to fully participate in the burial ceremonies of former Justice of the Supreme Court, Justice Chukwudifu Oputa, just as they commiserated with the people of Kano State on the death of the Emir of Kano, Alh Ado Bayero.

The governors also resolved to continue supporting the zone's delegates at the ongoing national conference following the extension of the exercise.