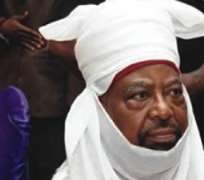 Governor of Kano State, Rabiu Kwankwaso, on Saturday said the state government will announce a new Emir of Kano on Sunday (today).

The governor said this after receiving the emirate's kingmakers at the Government House, Kano.

The new emir will succeed Ado Bayero, who passed on in the early hours of Friday after an undisclosed ailment and was buried in Kano a few hours later in accordance with Islamic rites.

The News Agency of Nigeria reports that the kingmakers who visited the governor were the Madakin Kano, Yusuf Chigari; the Sarkin Dawaki, Bello Abubakar; the Makaman Kano, Abdullahi Ibrahim; and Sarkin Bai, Mukhtar Adnan.

Bayero, the longest-serving emir in Kano's history, ascended the throne in 1963 and ruled for 50 years until his death.

He was named the successor a day after the death of his father, Alhaji Abdullahi Bayero.

It was gathered that a list containing three names was submitted to Kwankwaso, who is to give final approval, according to tradition.

The immediate past Governor of the Central Bank, Sanusi Lamido and his uncle, Sanusi Abbas and the late Emir's son, Alhaji Nasir Ado Bayero, as of Saturday were the three front runners in the race to succeed the late Emir of Kano, Alhaji Ado Bayero.