Our Performances Remain The Greatest Selling Point Of APC—Madumere 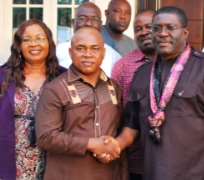 Imo Deputy Governor, Prince Eze Madumere has reiterated his stance that All Progressives Congress remains the party to beat come 2015 owing to people oriented programmes of her leadership.

Speaking to the executive members of the party that paid a solidarity visit on him, he averred that the party has good product in its leadership saying with what Governor Okorocha of Imo State has done, there is hardly any other vehicle that could beat the party during elections.

He however observed that other political parties that have performed woefully when they had the opportunities have resorted to mudslinging and name calling rather than on debate on issues and developments.

The number two citizen of Imo State further assured his guests that those democratic pitfalls of other parties that have attracted condemnation will not be experienced in the party. He called on those interested in any elective post to reach out to the people since they remain the deciding factor on who becomes what when the chips are down.

Beyond the performances and giant strides of APC governors and Owelle Rochas Okorocha he congratulated the Executive members of the party of Owerri Zone for emerging for the various offices from the congress. He said APC remains the only vehicle to move Imo forward. He further said there is no alternative to APC to lead Imo State to the promised land.

He further averred that APC will take over Imo State including Owerri zone. He revealed that due to internal democracy observable in Imo APC and as has severally been demonstrated by Governor Okorocha, people are coming out in their numbers to vie for various posts to contribute their quota in our State and Nigeria at large.

Speaking earlier when they paid a courtesy call on Prince Madumere, the Owerri zonal chairman of the fasted growing party in Africa, Hon. Chris Nwokeoma observed that the executive members of the party emerged through a transparent and democratic process devoid of magomago. "It was free, fair and transparent. We did not have to begin to chase one god father or the other. It was not because of money or whatever influence, people voted freely under a peaceful atmosphere."

He further informed the number two citizen and the best deputy Governor in the South East that the party is alive to its responsibility saying the party has been full of activities with aspirants touring local governments to meeting party faithfuls over their intentions in the forthcoming general elections in 2015.

He used the forum to thank Owelle Rochas Okorocha for his giant strides in Owerri zone, which has been a source of respite for other aspirants. He further expressed positivity over the forthcoming general elections.

In his conclusion, the APC chieftain revealed the plan for Owerri zonal mega rally at Dan Anyiam Stadium for the month of June, 2014, which he said will showcase the massive followership the party enjoys in the State.